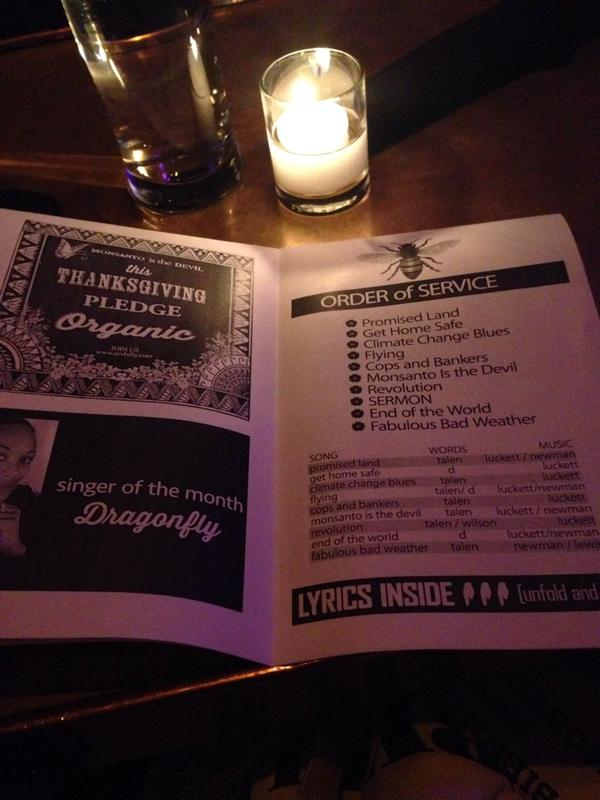 Photo from Sarah Galo posted on twitter and used by permission.

Lucky freelance writer Sarah Galo snapped the above photo, while she was at  Joe's Pub at the Public in NYC watching Billy Talen  and his choir taking on "Big Ag," especially Monsanto, and the struggle it causes bees (which we need to pollinate our food) and thus the rest of us.

I got to watch Billy Talen  live online and even if you missed it, you can, too (starting at 2:10).


More later on these activist artists and how they've taken on mountaintop removal.  (I met Billy and his choir at Appalachia Rising where we both performed.)  For today, just let's talk about the performance.  (I'll write more on what's happening to the bees later, too.)

Billy appeared, as usual, in Swaggart-like finery and the choir dressed  as Pilgrims, in preparation for their Thanksgiving protest at the corporate headquarters of Monsanto on November 27.  Special surprise guest was Joan Baez, who had also appeared with Billy and the Choir at a fundraiser for Ferguson activists on November 21.

Here's Erik McGregor (aka Minister Erik R. McGregor) photo used with permission of  Joan Baez with Billy and the choir at Joe's Pub from his photo set. 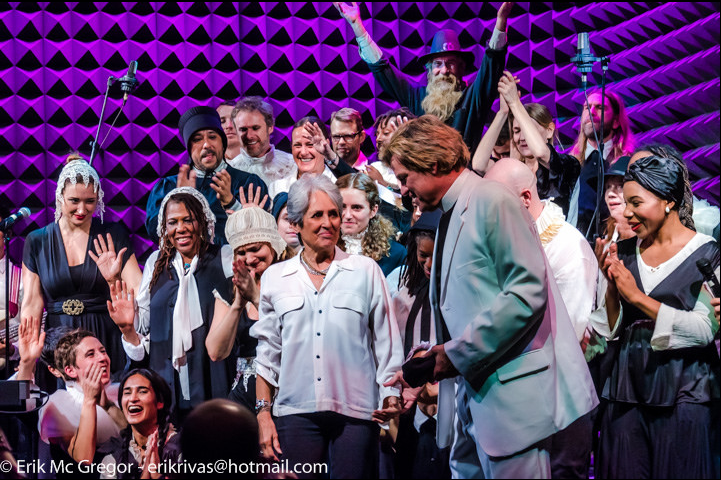 Here's another (used with permission)  of Reverend Billy and the Stop Shopping Gospel Choir, the latter in their incarnation as the "Honey Bees" taken in Boston from their IndieGoGo campaign to swarm corporate headquarters of Monsanto. 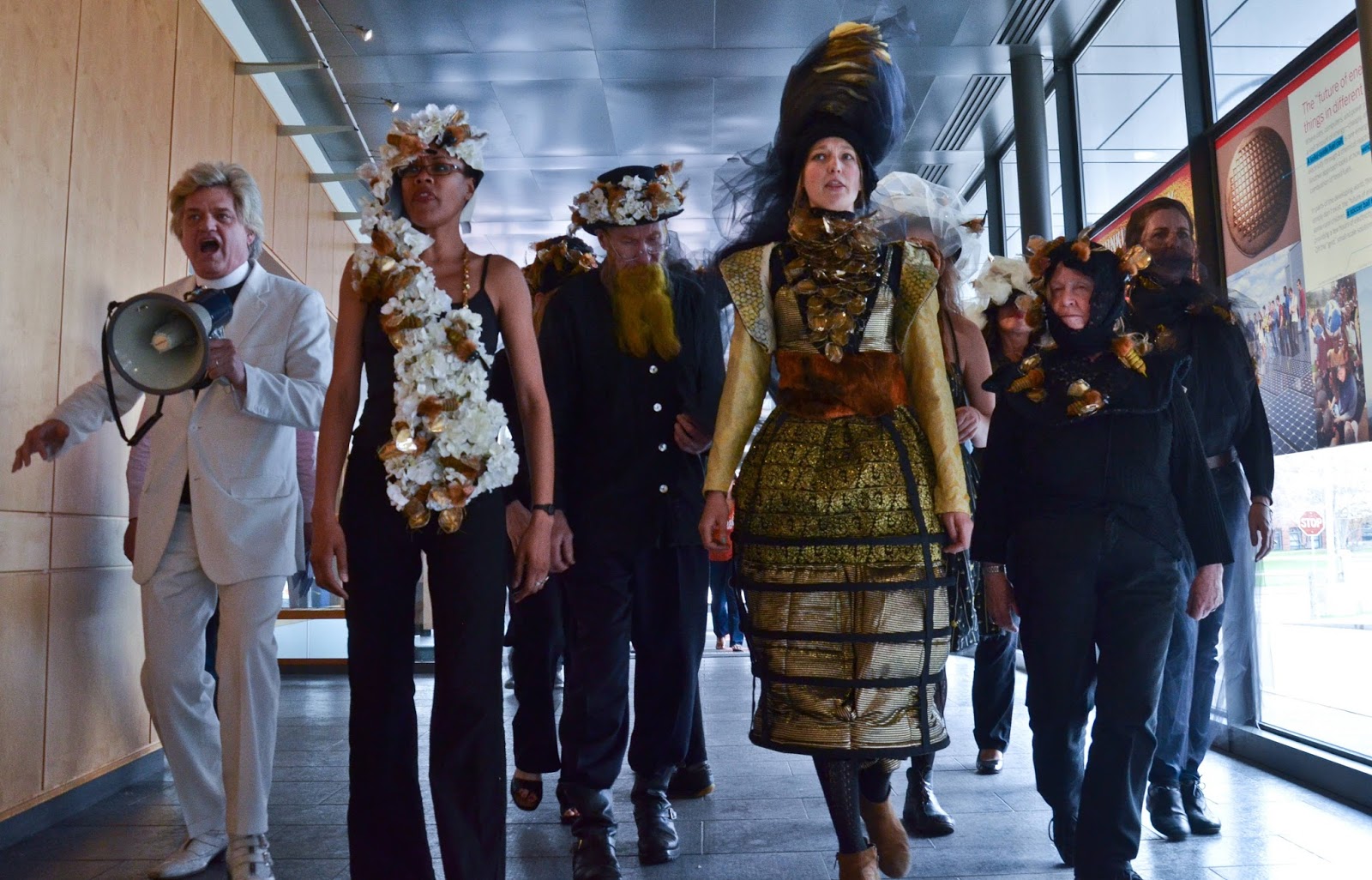 In addition to covering Reverend Billy and the Stop Shopping Choir, he document the actions of other NY-based activist groups including
* Sane Energy Project
* Food Not Fracking
* United For Action
* Food & Water Watch
* 350NYC
* Occupy Wall Street movement and the different affinity groups spawned from it.


Monsanto's world headquarters are in prosperous Creve Coeur (French for heart broken), a small city in St. Louis County, just 9.7 miles from Ferguson, where a jury is still deciding on the verdict--first slated for today--regarding the death of  Michael Brown.

Evidently the police chief there is prepared for the verdict: 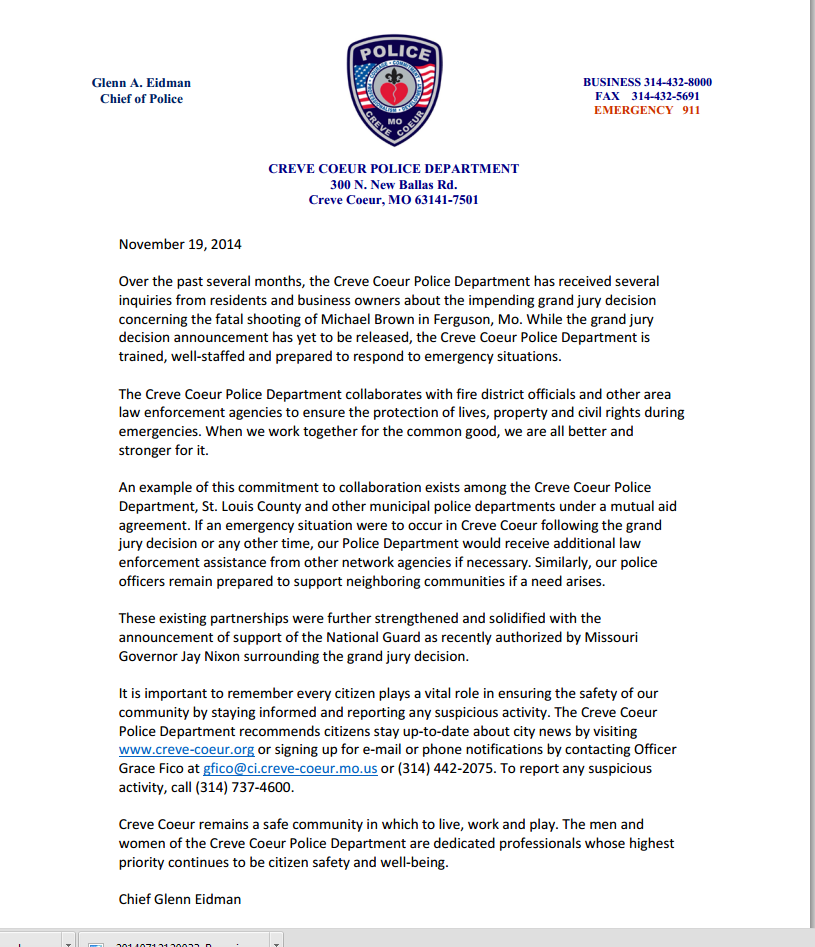 Posted by Beth Wellington at 2:08 PM