PD James: writing everything while remaining in the genre 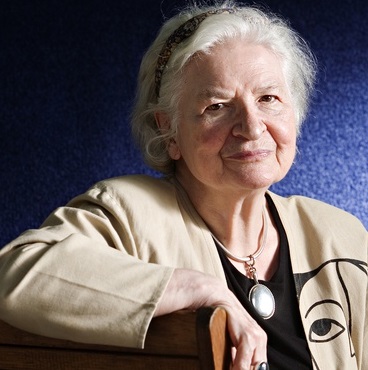 From the obituary of PD James by Stanley Reynolds in The Guardian:

...Phyllis [Dorothy] James had not started writing until her 40s, and said she only wrote a whodunnit as practice for a serious novel. Later on, though, she never fretted about being locked into crime writing. She said she could write everything she wanted while remaining in the genre.


What I miss when I don't go online.  While I was celebrating Thanksgiving, PD James died at age 94, having published Death Comes to Pemberley (Jane Austen revisited through a murder mystery) in 2011 "which combined my two great enthusiams in life" (quote from video at the end of this post) and Talking about Detective Fiction in 2009.  Both (and many more) are at the Virginia Tech Library including her 1999 autobiography, A Time to be in Earnest, as well as a DVD of Children of Men, the 2006 film based on her book on the end of the world due to male infertility of the same name published in 1992 (with a first U.S. edition by Knopf in 1993.)


James talks about why she started with and maintained loyal to the detective novel in her Paris Review interview from 1994 by the late Shusha Guppy:


I don’t make a distinction between the so-called serious or literary novel and the crime novel. I suppose one could say mainstream novel. But I didn’t hesitate long before I decided to try to write a detective story, because I so much enjoyed reading them myself. And I thought I could probably do it successfully, and the detective story being a popular genre, it would have a better chance of being accepted for publication. I didn’t want to use the traumatic experiences of my own life in an autobiographical book, which would have been another option for a first attempt. But there were two other reasons. First, I like structured fiction, with a beginning, a middle, and an end. I like a novel to have narrative drive, pace, resolution, which a detective novel has. Second, I was setting out at last on the path of becoming a writer, which I had longed for all my life, and I thought writing a detective story would be a wonderful apprenticeship for a “serious” novelist, because a detective story is very easy to write badly but difficult to write well. There is so much you have to fit into eighty or ninety-thousand words—not just creating a puzzle, but an atmosphere, a setting, characters . . . Then when the first one worked, I continued, and I came to believe that it is perfectly possible to remain within the constraints and conventions of the genre and be a serious writer, saying something true about men and women and their relationships and the society in which they live.

It's not as if James didn't want to be a writer earlier than at age 40.  As Marilyn Stasio noted
in the NYT, James was fond of saying [as she did in the Paris Review],


When I first heard that Humpty Dumpty fell off the wall...I  immediately wondered: Did he fall — or was he pushed?

I didn't know that James opposed Scottish independence and marriage equality in the House of Lords until I read a bitter comment in The Guardian.  Evidently, activist Linda Semple has forgiven her for both, if not two of the books I mentioned above. (Semple "spent the 1980s and ’90s working in women’s and LGBTQ organizations, publishing, and journalism. She now works for the Scottish Government, heading up its work on health and social care efficiency.")

I love this send up James gave the BBC (tape), which she describes as being a:

large and unwieldy ship … with a crew that was somewhat discontented and a little mutinous, the ship sinking close to the Plimsoll line and the customers feeling they have paid too much for their journey and not quite sure where they are going or who is the captain.


But even more, this lovely interview with James by Australian journalist Jennifer Byrne which aired on ABC Book Talk on 5/14/2013:

Posted by Beth Wellington at 5:44 PM