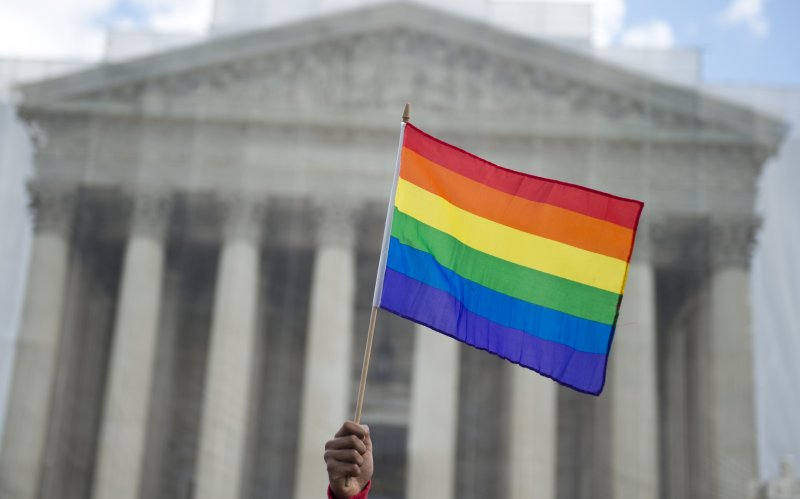 Saul Loeb's  photo by accompanied Geoffrey Stone' s 8-3-14 essay in The Daily Beast,  "Justice Kennedy Opened the Door to Same-Sex Marriage, Will He Walk Through Next?: Twenty-nine consecutive judicial decisions in the past year have held bans on gay marriage are unconstitutional. This is nothing short of extraordinary."

Just a month ago, on October 6, the Supreme Court refused to hear appeals from from five states seeking to prohibit gay and lesbian unions.  Now, on November 6, in a 2-1 decision in DeBoer v. Snyder, 6th Circuit Judges Jeffrey Sutton and Martha Cook (both Bush appointees) have upheld gay marriage bans in MI, OH, TN, and KY-- breaking ranks with many courts who have expanded rights since United States v. Windsor, when  the U.S. Supreme Court struck down part of the federal Defense of Marriage Act.

The link for the opinion is thanks to my favorite SCOTUS journalist, Lyle Denniston, who writes here


Probably the only way that this ruling would not predictably lead to Supreme Court review, it appears, is if there is a request for en banc review in the Sixth Circuit, and that request is granted.


Geoffrey R. Stone, Edward H. Levi distinguished service professor of law for The University of Chicago, believes that this "what Justice Kennedy has been waiting for," observing that Kennedy wrote the opinion, not only in Windsor, but two other  major Supreme Court decisions that opened the door for  gay marriage:


Sutton had upheld Obamacare, perhaps giving some supporters of equal rights cause for hope that he would support gay marriage.  Mark Joseph Stern, however, called it correctly on August 7, when he wrote for Slate after observing Sutton during the arguments the previous day.


Based on Wednesday’s arguments, marriage advocates have good reason to worry. Unlike Cook, who clearly viewed gay marriage prohibitions as a rational state policy, Sutton seemed to scowl at the prospect of excluding an entire class of people from marriage. But unlike Daughtrey—who fiercely questioned the state’s interest in discriminating against gays at every turn—Sutton appeared exceedingly hesitant to bring gay marriage to America through judicial fiat.


In just eleven years, nineteen States and a conspicuous District, accounting for nearly forty-five percent of the population, have exercised their sovereign powers to expand a definition of marriage that until recently was universally followed going back to the earliest days of human history. That is a difficult timeline to criticize as unworthy of further debate and voting. When the courts do not let the people resolve new social issues like this one, they perpetuate the idea that the heroes in these change events are judges and lawyers. Better in this instance, we think, to allow change through the customary political processes, in which the people, gay and straight alike, become the heroes of their own stories by meeting each other not as adversaries in a court system but as fellow citizens seeking to resolve a new social issue in a fair-minded way.

Judge Martha Craig Daughtrey (a Clinton appointee) dissents, starting off with a quotation from Benjamin Cardozo, The Nature of the Judicial Process (1921) “The great tides and currents which engulf the rest of men do not turn aside in their course to pass the judges by.”  Her introduction is scathing:


The author of the majority opinion has drafted what would make an engrossing TED Talk or, possibly, an introductory lecture in Political Philosophy. But as an appellate court decision, it wholly fails to grapple with the relevant constitutional question in this appeal: whether a state’s constitutional prohibition of same-sex marriage violates equal protection under the Fourteenth Amendment. Instead, the majority sets up a false premise—that the question before us is “who should decide?”—and leads us through a largely irrelevant discourse on democracy and federalism. In point of fact, the real issue before us concerns what is at stake in these six cases for the individual plaintiffs and their children, and what should be done about it. Because I reject the majority’s resolution of these questions based on its invocation of vox populi and its reverence for “proceeding with caution” (otherwise known as the “wait and see” approach), I dissent.


Posted by Beth Wellington at 7:29 PM