The Ridgeliners at The London Underground, Black Twig Pickers at Cellar in Blacksburg Saturday November 22 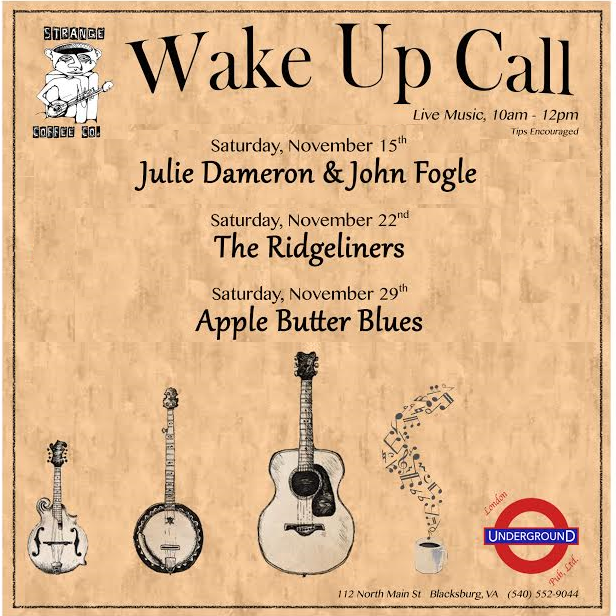 Mike Gangloff﻿ just let me know about  The Ridgeliners will be playing the London Underground Wake Up Call﻿ gig this morning Saturday November 22 from 10-12 (with Mike on fiddle and  some or all of the following: Debby Freed﻿ on banjo; Becky Barlow on upright bass; Charlie Anderson on fiddle, washtub bass and step-a-tune, Kevin Roberts on guitar and maybe even Cara Gangloff﻿ on washboard?)  As Mike told a common friend of ours via facebook, "This is a rare occasion when an old-time band will assemble while the sun is still ascending...without necessarily have played through the entire night before."

One of Mike's other bands, the Black Twig Pickers plays The Cellar this evening

Doug Thompson﻿ caught the Ridgeliners (and Kim Kirkbride dancing with other members of the audience) for his video when they played The Friday Night Jamboree in Floyd, Virginia on August 22, 2014 (posted with his permission.)

The Ridgeliners from Doug Thompson on Vimeo.


You can also check them out playing "Big Fish" for Couch by Couchwest:

BTW, Matt Peyton, who is one of the coordinators for Couch by Couchwest  has some other sites online you might want to check out:
Feel Bad For You Monthly Mixtape – any song, any genre, any year
A Truer Sound - a southwest Virginia located music blog
@Truersound
Posted by Beth Wellington at 10:40 AM