How will Roberts Rule on Clean Water? 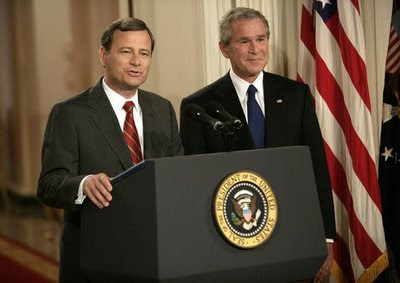 I have often said that a major effect of any Presidency is the effect of its Supreme Courts appointments. Even after an administration is long gone, its life-time appointees continue to to make rulings which affect all of our lives.

In "The Chief Justice on the Spot."Greenhouse, the former NYT Supreme Court reporter who is a Knight Distinguished Journalist-in-Residence and Joseph M. Goldstein Senior Fellow at the Yale Law school, wrote January 9,

A case sitting quietly in the Supreme Court’s in-basket promises to tell us more than almost any other about John G. Roberts Jr. and his evolution from spear carrier in the Reagan revolution to chief justice of the United States — and in the process set the direction of the debate over race and politics for years to come.

Greenhouse was writing about a voting rights case, but she just as easily could have been writing about a mining case currently before the Supreme Court. And while that case involves gold mining in Alaska, it has relevance for the continued expansion of mountaintop removal coal mining here in Appalachia. That's because the Alaska case involves dumping mine waste in bodies of water, a practice which makes MTR more feasible.

With this case, we can look at one more piece of the Bush legacy. First, because of regulations promulgated by the administration. Second because of the Bush nomination of John Roberts as the Chief Justice of the Supreme Court. The Clean Water Protection Act proscribed dumping mine waste in bodies of water. But , faced with suits about violations of the Act, Bush's Army Corps of Engineers redefined that waste as "fill." And, although it was not widely discussed at the time of his nomination, Roberts, before he took his seat, acted as "spear carrier" when he advised the National Mining Association pro-bono on how to deny citizens standing in environmental cases/ And then, two years later, he hired on to argue on behalf of the association against citizens trying to stop coal companies from shearing off West Virginia's mountains.

The case before the Supreme Court

In the mining case being argued today, Coeur Alaska, Inc. v. Southeast Alaska Conservation Council, et al. and Alaska v. Southeast Alaska Conservation Council, et al., the Army Corps of Engineers granted a permit for a gold mine north of Juneau, Alaska, to the company Coeur Alaska. The permit allows the company to deposit mine tailings into Lower Slate Lake after raising the level of the lake by building a long earthen dam. Tom Turner (bio, email) , editor at large for the public interest law firm EarthJustice, wrote January 9 on the Coeur case,

All agree that the tailings, fill or otherwise, would kill nearly all life in the lake. Coeur and the Corps insist that once the ore has been exhausted they’ll restore the lake to its former glory and where have we heard that before.

According to another Martin post today, a mining company attorney told the court that an Alaskan lake would be better off in the long run and

Tom Waldo, an attorney in Earthjustice's Juneau office argued the case at the Supreme Courttoday on behalf of the Southeast Alaska Conservation Council, Lynn Canal Conservation, and the Sierra Club. Here’s their brief and information on their victories to date.

The troubling implications of the case

That the high court agreed to review the case is troubling—if it had left the appeals court decision alone all would have been well. Should the Court uphold the Corps’ authority to discharge mine waste in a pristine waterway, all waters everywhere could be at risk and the Clean Water Act would be in a shambles.

That the court agreed to review the case is especially troubling, to my mind, given Benjamin Wittes's observation in the May 2005 issue of The Atlantic that,

the threat to basic environmental protections from conservative jurisprudence is broad-based and severe...By tightening doctrinal requirements that limit citizen access to the courts, judges greatly reduce the legal accountability of polluters.

Roberts and the coal industry

As I wrote for the New River Free Press at the time of Roberts's nomination,

In 1999, as a partner in the Washington, DC law firm of Hogan & Hartson, Roberts’s lecture before the NMA’s conference offered "several pointers" on how the group might get their views heard by judges.

The NMA was not a direct party in the case; instead, it hired Roberts and two other attorneys at his firm of Hogan & Hartson to file a "friend of the court" brief in the 4th U.S. Circuit Court of Appeals, saying the ruling "jeopardize[d] the continued viability of the coal industry in Appalachia and elsewhere."

The brief also argued that Haden had allowed citizens to "circumvent" an administrative process to appeal permit decisions to the state Surface Mine Board. "Such a result eviscerates the very process Congress established to coordinate the various regulatory programs applicable to coal mining, and creates grave uncertainty for the members of the coal industry who rely upon mining permits as the blueprint for compliance with these programs."

In its April 2001 decision, the 4th Circuit overturned Haden, saying the dispute instead belonged in state court [where the coal companies hold more sway.]

The Supreme Court decision in the Alaska case, not expected until June, will fill in another piece of the puzzle of the legacy of George W. Bush. The position Roberts takes will reveal whether he continues pro-mining bent or departs from it in his current role. And if the Roberts Court upholds dumping in streams, it will setting a destructive precedent for mountains and for clean water, unless the Obama Administration and Congress provide relief.
Posted by Beth Wellington at 11:27 AM