Word of the Day: Archaea 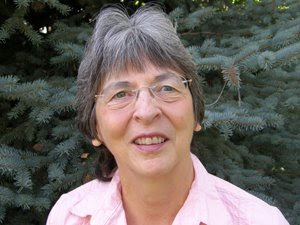 Photo of Pattiann Rogers from the Vermont Studio Center, where she will be giving a reading in October 2009.

I wasn't familiar with the term "archaea" and looked it up after reading the lovely poem by Pattiann Rogers found below (website, email), which first appeared in the September 2005 issue of Poetry. (hat tip to Amy Grier (email). Archaea are a

unique group of microorganisms classified as bacteria (Archaeobacteria) but genetically and metabolically different from all other known bacteria. They appear to be living fossils, the survivors of an ancient group of organisms that bridged the gap in evolution between bacteria and the eukaryotes (multicellular organisms).

The name Archaea comes from the Greek archaios meaning ancient.

From MedicineNet, the authors of the Webster's New World Medical Dictionary. See also the UC Berkeley Museum of Paleontology exhibit, Life's Extremists. Archaea can live where othres wound not survive, for instance in the hot springs at Yellowstone.

Address: the Archaens, One Cell Creatures

Although most are totally naked
and too scant for even the slightest
color and although they have no voice
that I've ever heard for cry or song, they are,
nevertheless, more than mirage, more
than hallucination, more than falsehood.

They have confronted sulfuric
boiling black sea bottoms and stayed,
held on under ten tons of polar ice,
established themselves in dense salts
and acids, survived eating metal ions.
They are more committed than oblivion,
more prolific than stars.

Far too ancient for scripture, each
one bears in its one cell one text--
the first whit of alpha, the first
jot of bearing, beneath the riling
sun the first nourishing of self.

Too lavish for saints, too trifling
for baptism, they have existed
throughout never gaining girth enough
to hold a firm hope of salvation.
Too meager in heart for compassion,
too lean for tears, less in substance
than sacrifice, not one has ever
carried a cross anywhere.

And not one of their trillions
has ever been given a tombstone.
I've never noticed a lessening
of light in the ceasing of any one
of them. They are more mutable
than mere breathing and vanishing,
more mysterious than resurrection,
too minimal for death.

The Spring 2008 issue of the Georgia Review featured an interview with Rogers by Gordon Johnston, Breaking Old Forms: A Conversation.

Posted by Beth Wellington at 4:44 PM