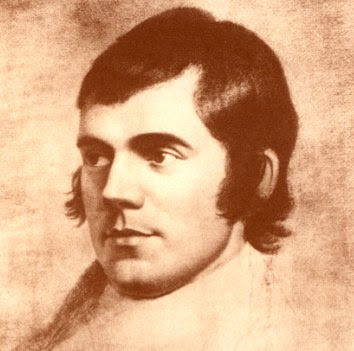 Portrait of Robert Burns from The Scotsman.

And there's a hand my trusty fiere,
And gie's a hand o thine,
And we'll tak a right guid-willie waught,
For auld lang syne 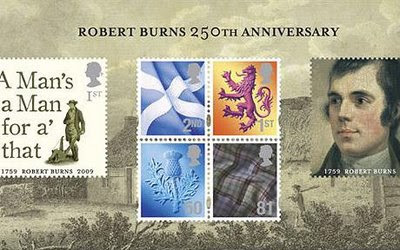 With the issue of the set, the Telegraph reports,

Scotland's national bard will overtake Winston Churchill, who has been honoured with two special editions of stamps, while William Shakespeare and Charles Dickens have only received one each.

The night was marked all over the world with dinners in the bard's honor (even in Lawrence Kansas.) And if you want to plan a Burns Supper for next year, Bennett Fischer of Brooklyn, N.Y. has the recipes. Hugh Porter last year explained all about haggis for Time Magazine in "The Bacchanal of Burns Night." Of course he was writing from London, so he maunna be thought of as tha gowd standard.


The BBC has coverage of the celebration in Scotland here. Everything you wanted to know about the Scottish Bard can be found here.
Posted by Beth Wellington at 11:53 PM