On Asters and Wood Asters

Some of my friends, such as Rachel, rescue animals. I have done the same in the past, but my current landlord nixes the idea, so I rescue plants. You might have noticed the horticulture death camps aka Kroger and Walmart and one apartment I shared with a roommate who shall go unnamed.

I have a velvet plant propagated from a cutting from a straggly victim of said roommate before she could kill it.  I've got an orchid that's re-bloomed and last fall I picked up a New York aster, my favorite blue, the color of the periwinkles my dad raised.  My friend Cara kept all of them alive (she called them the Green Wellingtons) during my time away from home after an unfortunate December run-in with a car in a crosswalk (I was the pedestrian) that left me with shattered legs, a dropped foot and a still painful broken shoulder which made my left arm pretty useless.

So, when Cara wrote me a note back in April to say she and Mike were about to leave leaving the country for 13 days starting Wednesday and she needed to return my plants, I was apprehensive. After all, I was still homebound and could barely feed and water myself.  It fell to Mike to bring them by.  And although he was  on his way to a gig, he kindly helped me re-pot them into lighter containers which I'd be able to take to the sink from my desk one at a time via walker.

Happily, my bedroom is sunny and all of the houseplants are doing well, and if anything, helping  me heal, however slowly. I've even got a new addition, a basil plant which Sue brought me.

New York asters, though, require full sun. I thought my adopted had baked to death recently, since I couldn't set it in the ground (the landlord warned his groundskeeper might mistake it for a week unless I marked it clearly and I just wasn't up to digging a hole anyway.)  Full of guilt and sadness, I watered the pot of scorched stalks and leaves one last time and set it with some small measure of optimism  against the building.

The aster failed to come back to life. In fact, it dried up until it resembled a tumbleweed. I even announced its demise to one of my favorite circulation staff members whom I had promised a start if I were able to divide the root stock. (She too loves the color and had kept it on her desk for the day while I ran errands until I could return to the library to take it home.)  She consoled me that she had lost some of her rose bushes.


And then today, a small miracle, new green leaves! If this aster doesn't make it after all, my next will be a wood aster, even if I have to buy it retail. Strangely, this beautiful late flowering native plant is sometimes called a weed because it can grow almost anywhere, loves the shade and can tolerate dry soil.  Fittingly, its largest populations can be found in Appalachia, although it's been known to thrive even in Central Park.  While the white version is most common, there's even a variety in my favorite color.  And looking at its photograph, I think it is even lovelier than the domesticated version; its disk florets start out yellow, but eventually turn purple. 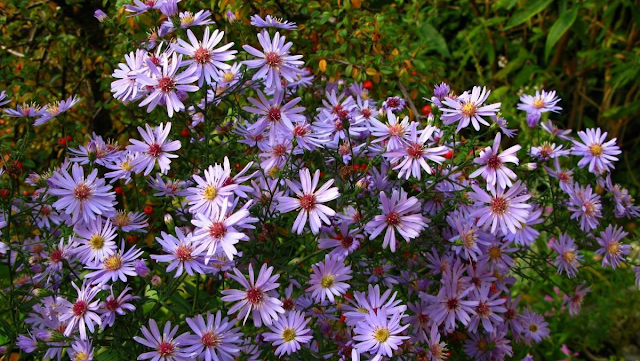 Posted by Beth Wellington at 10:05 PM