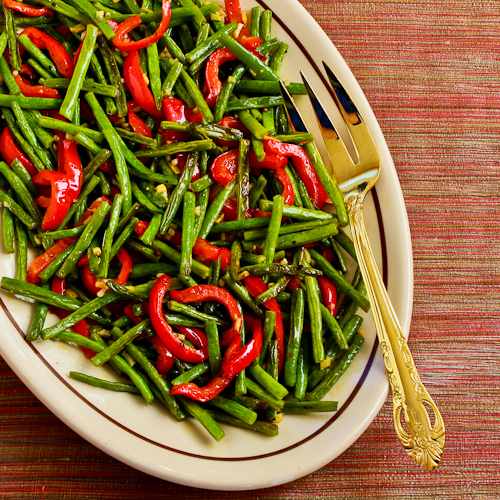 Photo by Kalyn Denny inspired my own recipe.  The vinaigrette  is a variation on one by the wonderful Molly Kazen, who uses hers in a recipe for roasted eggplant.

The veggies in the August 24 share from Glade Road Growing is slated to include:  eggplant, green beans, sweet red Italian peppers, red onions and lettuce mix.  If you wanted you could also use the eggplant in this recipe.  I have a green bean and cucumber salad here and a Salad Niçoise that includes green beans here.  I love green beans so much, I've even got a poem about them (published some decades back in Artemis.


1.  To make coconut milk,  heat 2 cups of water on the stove until it’s hot, but not boiling.  Put 1 cup dried coconut chips in a blender and add hot water.  Blend on high  for 2 minutes or until you get a creamy, thick homemade coconut milk.  Line a strainer or colander with cheesecloth. Pour the coconut milk through the lined strainer into a bowl. This will remove any larger remaining coconut meat. When you’re done pouring the coconut milk through the strainer, ball up the cheesecloth and give it a good squeeze to press the remaining liquid through. You can use your residual coconut caught in the cheesecloth in a recipe that calls for coconut.  You will need 3 tablespoons to make 3/4 of a cup dressing.  Transfer coconut milk from the bowl into a lidded glass container and keep in the refrigerator for up to four days.  Or you can preserve the unused portion longer by freezing it in an ice cube tray. Once firm, transfer the cubes to a wide mouth canning jar for longer storage to pull out what you need, when you need it.

2.  To make the dressing, finely chop  4  tablespoon of  red onion.  In a small bowl, combine with 3 tablespoons fresh lime juice, 3 tablespoons of the coconut milk,½ teaspoon sea salt, 1 teaspoon demerara sugar or honey and whisk to thoroughly blend. Drizzle in 6 tablespoons of extra virgin olive oil, whisking as you go, until it is fully incorporated.  Store in a tightly covered container (a small jar with a lid is ideal) in the refrigerator. Shake and/or stir from the bottom before use. Makes about ¾ cup.

3.   Preheat oven to 450F (or I used my countertop convection oven at the same temperature.

5.  Cut red peppers in fourths lengthwise, removing the stems and seeds and trimming any white pithy parts.   Cut into thin strps.  Trim ends of green beans and cut them in half.  Put in a medium-sized bowl and toss with the seasoned olive oil from Step 4. Season to taste with sea salt and fresh ground black pepper. Spread the vegetables out on a large baking sheet, arranging it so vegetables aren't crowded (as much as you can.) Roast 15 minutes, or until a few beans are starting to look browned and the veggies are tender-crisp.

Posted by Beth Wellington at 4:02 PM