Chard with Tomatoes and Tempeh 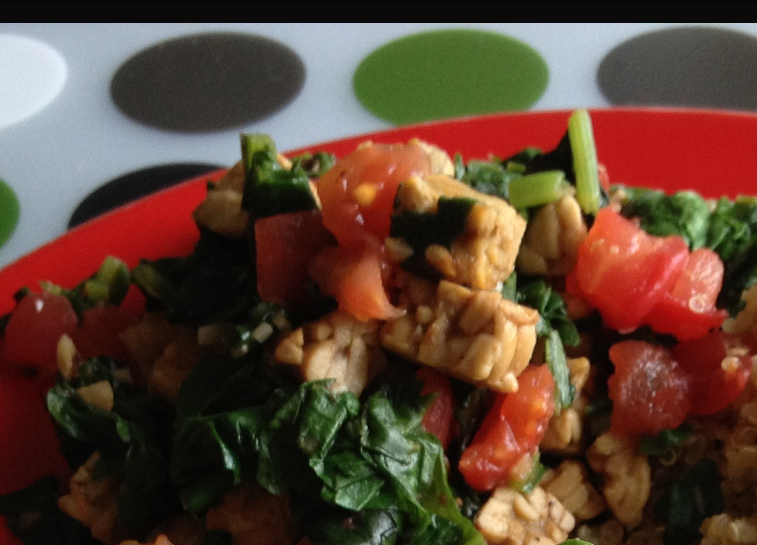 Photo is cropped by one  Gnoe of Utrech, Holland.

Veggies in the farm share from Glade Road Growing the week of August 18 are expected to include:  sweet peppers, eggplant, garlic, tomatoes, and rainbow chard.

I like to serve this recipe over cooked brown rice, quinoa or buckwheat kasha, drizzled with a bit of balsamic vinegar.

Two previous recipes are for eggplant rollups with chard and chard with a balsamic vinegar and rosemary syrup.  The chard would also be great tossed with warm cooked lentils to wilt  and then chillded and served in a salad with the tomatoes, the peppers and some feta cheese.

3.  Peel and smash 8 cloves of garlic and chop finely

5.  Saute tempeh and garlic in a cast iron skillet coated well with extra virgin olive oil until light brown in color.  Add chard stems, red pepper flakes and sea salt to taste with some more oil and cook for a couple of minutes until stems are soft.

6.  Transfer to a covered saucepan.   Add chopped chard leaves and a bit more oil, mixing well to coat evenly.  Cover and let simmer for about 6-8 minutes, until leaves are wilted. Stir occasionally. When chard is done, add tomatoes.


Posted by Beth Wellington at 3:06 PM