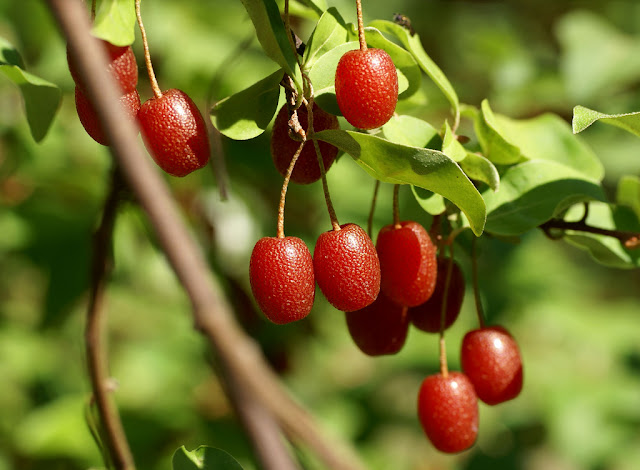 Photo of goumi berry (elaeagnus multiflora) by HEN-Magonza on Flickr

Today, at the market, Bill Whipple ((AKA Dr. Barkslip) of  has set up a display of his berries for folks to taste and buy.  He offered at least three kinds of gooseberries, red currants, tart cherries, black cherries, black raspberries, mulberries and one I couldn't identify.

It turned out those were goumi berries, a sweet-tart red fruit (aka gumi, natsugumi, or cherry silverberry), a native of China, Korea and Japan, which he has grafted on to the more common Autumn olive (or maybe Russian olive...I can't remember which)  in the same family.  I read it's  regarded by the USDA as an invasive--that's probably because all of them have the ability to fix nitrogen and thus can grow places where more delicate plants suffer.

Next to the table, he had set out a large branch from a tart cherry tree  in a pail of water, with a sign "pick your own"  sign. I bought a box of mixed berries which included the goumis. He talked about how he lets his trees decide if they're fit for propagation, by whether they thrive without spraying.


Bill homesteaded his farm in Monroe County near Union, West Virginia starting decades ago and began planting fruit trees as he  pursued a career as a studio furniture maker.  He has furniture on display at Henderson, NC's Silver Fox Gallery and has made traveling violins which he calls wipLstix, pictured at the end of this post.  I'm not sure if he still makes them, as he lists his address on the site as Union, WV, rather than Asheville--I'll have to ask him about the wipLstix when he comes back to Blacksburg with his pears.  That's  how I met him last year, through baker Aaron Grigsby.

If you want to read more about Bill's adventures in horticulture, you can read his blog, where he posted before he started a website for his farm and fruit school.  He has also published on grafting in Permaculture Activist (#87 Weeds to the Rescue, Spring, 2013, "W.E.E.D:  World of Excessive Extracurricular Dendrology") and is one of the founders of the Buncombe Fruit and Nut Club. At one time he was caretaker for the George Washington Carver Edible Park.   In the small world department, it turns out that that park is managed by Bountiful Cities Project, which also manages my friend Randal Phlegar's project, Grass to Greens. 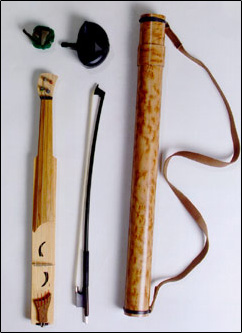 Photo from Bill's site  and three videos from YouTube.

And finally a chin and shoulder rest adaptation from Australia's Animato Strings.


Posted by Beth Wellington at 4:49 PM