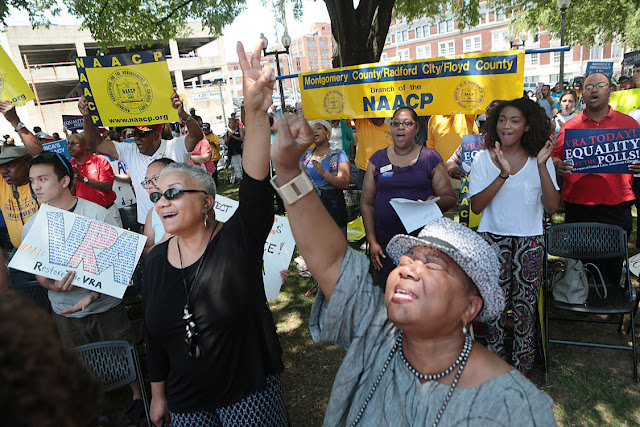 Photo by  Heather Rousseau for the Roanoke Times

The previous day, Dems Tim Kaine and Mark Warner co-sponsored Patrick Leahy's Senate bill S.1659 seeking to restore the pre-clearance provision. The bill establishes a “rolling” trigger so only states with recent records of discrimination would be targeted and expands the authority of the courts to order that troubled jurisdictions be put under pre-clearance.

Upon its introduction, Senator Leahy explained the rationale for the bill:

Mr. President, this year marks the 50th anniversaries of the March from Selma to Montgomery and the passage of the landmark Voting Rights Act. Passage of the Voting Rights Act was the result of the blood, sweat, and tears of so many brave Americans who marched for justice--and the decades-long work of countless other men and women committed to seeing our country live up to its promise of equality and justice for all. Their actions transformed our Nation. On this 50th anniversary year, we pay special tribute to their legacy, but there is still work to be done. Each generation must contribute to the fight for equality. Each of us must answer the call to move this Nation toward a more perfect union.

In the coming weeks there will be continued celebrations of the passage of the original Voting Rights Act. Unfortunately, two years ago, the Supreme Court voted to dismantle a core piece of that vital legislation. In Shelby County v. Holder, five Republican-appointed justices on the Supreme Court drove a stake through the heart of the Voting Rights Act. Under Section 5 of the Act, the Federal government has the authority to examine and prevent racially discriminatory voting changes from being enacted before those changes disenfranchise voters in covered jurisdictions. By striking down the coverage formula that determined which States and jurisdictions were subject to Federal review, the Court effectively gutted Section 5. And in holding that the formula was based on outdated information, the Roberts Court disregarded thousands of pages of testimony and evidence from nearly 20 congressional hearings held when the law was reauthorized in 2006.
Within weeks of the Supreme Court's devastating ruling, Republican governors and State legislatures exploited the Shelby County decision. Several States with a documented history of racial discrimination in voting implemented sweeping laws that disproportionately suppressed the voting rights of minorities, the elderly, and young people.

For example, Texas immediately implemented the most restrictive photo identification law in the country. Although, a Federal judge found the law to be an ``unconstitutional poll tax'' that could disenfranchise up to 600,000 voters and disproportionately impact African Americans and Latinos, the law was allowed to disenfranchise voters this past election.

In North Carolina, the Republican legislature and Republican governor passed a far-reaching bill that restricted its citizens' right to vote. The bill cut early voting down from 17 days to 10 days, eliminated teenagers' ability to preregister before their 18th birthday, and eliminated same day voter registration. It also enacted a strict photo identification requirement, which is currently being challenged in court.

These are just a few of the numerous discriminatory voting restrictions that have been enacted since Shelby County was decided. We cannot sit by as the fundamental right to vote is systematically undermined. We must not retreat from our commitment to civil rights and the great accomplishments we celebrate this year. As my friend Congressman John Lewis has stated, voting ``is the most powerful, nonviolent tool we have to create a more perfect union.''

Posted by Beth Wellington at 6:08 PM