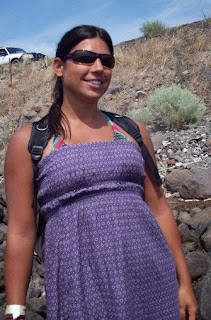 Photograph of Beth Roach, guest writer for this post.  My friend from Surry  County, Virginia, she is fighting the proposed  coal-fired electric plant in the town there of  Dendron.   She says she was privileged to be born and raised in this special place called Surry, that the ability to explore the wilderness, play outdoor athletics, and swim in the James River strongly influenced her life.  It was such inspiration from her surroundings that led to her career encompassing historic interpretation, environmental education, and natural resource conservation. She descends from the Nottoway Indian Tribe, which she is an enrolled member.

Monday, March 5, citizens in Surry County will again be asking Dendron Town Council to block Old Dominion Energy Coop (ODEC)'s proposed  coal-fired electric plant that will overshadow the tiny town (population 200) at a  time when other states are deciding that new coal-fired plants are NOT a good idea.  As scientist Mark Jacobson  has written:


The best ways to improve energy security, mitigate global warming and reduce the number of deaths caused by air pollution are blowing in the wind and rippling in the water, not growing on prairies or glowing inside nuclear power plants.

And "clean coal," which involves capturing carbon emissions and sequestering them in the earth, is not clean at all....

This follows on a hearing before the Surry County Planning Commission on February 27, which my friend in Surry, Betsy Shephard critiques:

One of the things that came out of last week's Planning & Zoning hearing (besides the fact that out of 350 attendees, only 7 residents spoke in favor of the coal plant....more on that another day), was that finally there would be an official recommendation that the Town of Dendron commission a 3rd party study.

I asked another friend, Beth Roach, who attended the the hearing to write a guest post on what happened.  She says the views expressed here are her own, yet she hopes that many others will consider both sides of the argument and listen to their consciences...and their hearts.

So, I now turn this page over to Surry native Beth Roach..

All I ask is for them to consider both sides. The powers that be in Surry have made it no secret that they are through hearing arguments and ready to vote, pass, and cash those checks. Numerous testimonies by local residents, environmental non profit groups, and regional neighbors have fallen upon deaf ears. While a lot of locals have been a part of the fight for several years, there are others who are joining the opposition everyday. They are dismayed at the harmful effects that this process - from mountain top removal to coal combustion to fly ash storage - creates. They have difficulty understanding why the decision makers don't take this information seriously. The short term benefits are risks, speculations, projections, and assumptions. The term "state of the art technology" has been ODEC's flagship phrase to assure people that no harmful effects will exceed the government's regulations. This isn't good enough. There are many case studies that disprove this logic. I bet this approach has been used every time a plant has been built. Yet, each plant eventually has its problems. Safety records are well kept secrets; ask anybody who has worked at a power plant. They can tell you that "hiccups" very rarely make the paper. Unless ODEC has some super powered crystal ball with a %100 success rate, they can't forecast the future. Nor does this approach address the known problems associated with the amount of pollution that IS allowed under current regulations. What does it boil down to? We can show empirical evidence about why and how these emissions are so harmful. We can demonstrate how the air, water, and land will suffer throughout time. We can plead by reminding them that we are a part of the same community. That to serve the earth IS to serve man. Yet, we are forced to sit back and watch this coal plant move forward as if this stuff doesn't matter. Is it that more environmental education at a young age is needed? I believe so. An enormous amount of evidence has been presented, yet if people don't have the foundational knowledge of how this relates to the community at large then the evidence won't matter to them. Perhaps they do understand the science and chose to ignore it? I don't have a cure or a lesson plan for that problem. My closing thought comes from my mother, a reading teacher, and my aunt, a media specialist (modern term for school librarian) for Surry County Schools. Both want to share this piece of wisdom from the Lorax to the planning and zoning commission, to ODEC, to the board of supervisors, and to the Dendron Town Council: Unless someone like you cares a whole awful lot, nothing is going to get better. It's not.

Posted by Beth Wellington at 4:44 PM