Occupy the Supreme Court with Poetry: Money is Not Speech! 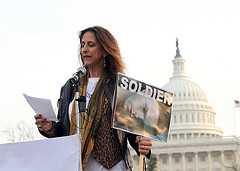 From Split This Rock:


◦an idea being drowned out by the noise of paid political advertisements
◦the importance of multiple voices in public life
◦the celebration of all the ways we exercise speech in the public realm: poetry and art, the letter to the editor, the vote, the protest, the prayer.

The line should not exceed 12 words. Write your line on a piece of paper and include the name of the poet, your name (if not using your own work) and your home town. Raise your poetic voice in a true act of free speech!