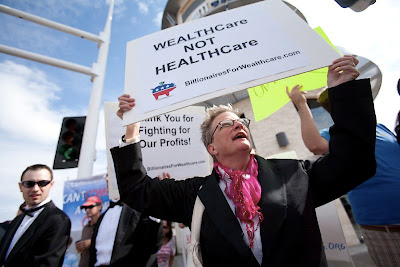 Photo of Billionaires for Wealth Care.

Billionaires for Wealthcare is a grassroots network of health insurance CEOs, industry lobbyists, talk-show hosts, and others profiting off of our broken health care system.

We are not a political, religious or even particularly well-organized group. We're simple folk, thrilled profiteers pouring out of our corner offices to dance on the grave of "Change."

We'll do whatever it takes to ensure another decade where your pain is our gain. After all, when it comes to healthcare, if we ain't broke, why fix it?

On Friday, September 4, the veteran journalist and former press secretary (to Lyndon Johnson) tried to the President some advice in an essay at the end of his PBS program, Bill Moyers Journal. Referring to the editors of The Economist saying the health care debate had become delirious, he found that charitable and preferred the term "deranged."

Only in a fantasy capital like Washington could Sunday morning talk shows become the high church of conventional wisdom, with partisan shills treated as holy men whose gospel of prosperity always seems to boil down to lower taxes for the rich. Poor Obama. He came to town preaching the religion of nice. But every time he bows politely, the harder the Republicans kick him. No one's ever conquered Washington politics by constantly saying "pretty please" to the guys trying to cut your throat. Let's get on with it, Mr. President. We're up the proverbial creek with spaghetti as our paddle. This health care thing could have been the crossing of the Delaware, the turning point in the next American Revolution — the moment we put the mercenaries to rout, as General Washington did the Hessians at Trenton. We could have stamped our victory "Made in the USA." We could have said to the world, "Look what we did!" And we could have turned to each other and said, "thank you." As it is, we're about to get health care reform that measures human beings only in corporate terms of a cost-benefit analysis. I mean this is topsy-turvy — we should be treating health as a condition, not a commodity. ...

Come on, Mr. President. Show us America is more than a circus or a market. Remind us of our greatness as a democracy. When you speak to Congress next week, just come out and say it. We thought we heard you say during the campaign last year that you want a government run insurance plan alongside private insurance — mostly premium-based, with subsidies for low-and-moderate income people. Open to all individuals and employees who want to join and with everyone free to choose the doctors we want. We thought you said Uncle Sam would sign on as our tough, cost-minded negotiator standing up to the cartel of drug and insurance companies and Wall Street investors whose only interest is a company's share price and profits.

Here's a suggestion, Mr. President: ask Josh Marshall to draft your speech. Josh is the founder of the website talkingpointsmemo.com. He's a journalist and historian, not a politician. He doesn't split things down the middle and call it a victory for the masses. He's offered the simplest and most accurate description yet of a public insurance plan; one that essentially asks people: would you like the option — the voluntary option — of buying into Medicare before you're 65? Check it out, Mr. President.

This health care thing is make or break for your leadership, but for us, it's life and death. No more Mr. Nice Guy, Mr. President. We need a fighter.

Richard Trumka (WaPo profile by Alec MacGillis--email) will be taking over as President of the AFL-CIO. In a speech August 31 at the Center for American Progress he issued a call to arms.

Today, more than ever, we need to be a labor movement that stands by our friends, punishes its enemies, and challenges those who, well, can’t seem to decide which side they’re on.

I’m talking about the politicians who always want us to turn out our members to vote for them, but who somehow, always seem to forget workers after the votes are counted.

For example, legislators who don’t understand that their job isn’t to make insurance companies happy; it’s to keep Americans healthy!

Legislators who say they’re are all for health care reform, but refuse to stand up for a public system that puts people before profits!

You know, to hear some of them, you’d think the objective isn’t to come up with a health care plan that works; it’s to write a bill Republicans will vote for.

But you can’t have both! 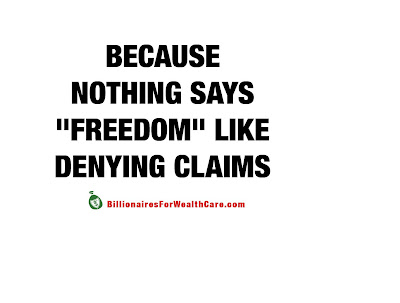 Posted by Beth Wellington at 4:19 PM