Crystal Sutton sucumbs to cancer at 68 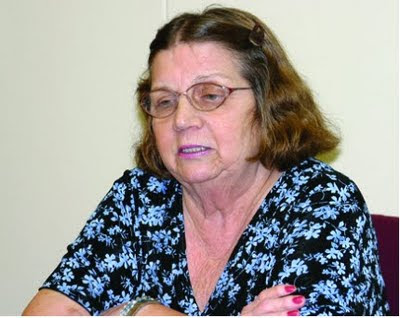 Photo of Crystal Sutton, the inspiration for the movie Norma Rae, at the time of a reception in her honor on June 12, 2007 on the ocassion of her donation of her papers to Almanance Community College in Graham, North Carolina (just east of Burlington--for info on the collection email Sheila Street.)

At the age of 33 in 1973, she worked at the J.P. Stevens plant in Roanoke Rapids, N.C., making $2.65 an hour folding towels, after having been employed by the company since the age of 17. She joined forces with Eli Zivkovich, a union organizer from West Virginia, in an attempt to improve working conditions. After that, she said,

Management and others treated me as if I had leprosy.

She received threats and was finally fired after copying a mill flyer saying blacks would run the union. In one final act of defiance,

I took a piece of cardboard and wrote the word UNION on it in big letters, got up on my work table, and slowly turned it around. The workers started cutting their machines off and giving me the victory sign. All of a sudden the plant was very quiet…

The police physically removed her from the plant, but The Amalgamated Clothing and Textile Workers Union (ACTWU) won the right to represent the workers at the plant and Sutton became an organizer for the union. In 1977, Sutton was awarded back wages and reinstated on her job by court order. Since she now had other opportunities, she returned for only two daysand continued her organizing work.

By 1988, she decided to decided to join the community college's Nursing Assistant program. I haven't yet found what happened to her organizing job that would lead her to train for such a relatively low-paying type of work, after years in the limelight. But her attendance there led her to donate her papers in 2007 to ensure they would be provided for future historians and students.

By that time she was already battling cancer, after a delay of two months caused by her insurance company, which at first would not immediately approve her medical treatment.

The Crystal Lee Sutton Awards, established in her name by the Motion Picture Editors Guild, recognize individuals and organizations whose efforts have contributed to presenting positive images of working people to the American public.

Sutton said in an interview
Posted by Beth Wellington at 11:23 PM