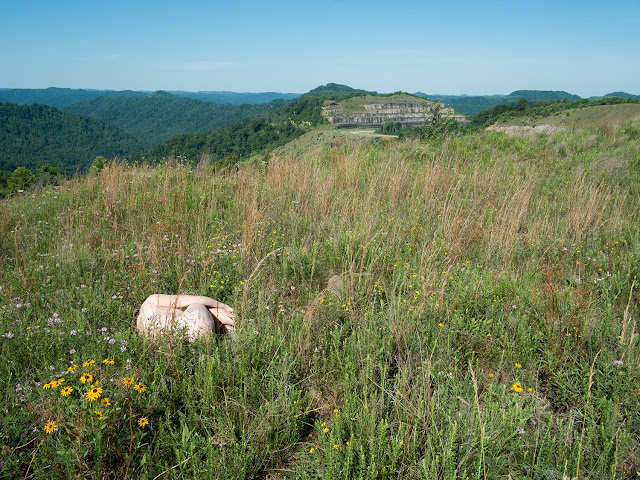 EDITOR's NOTE:  Photo and text copyright photographer Roger May for his current project, "Laid Bare," used by permission.  All rights reserved to the author.

Last night Roger posted on Facebook this photo and interview with the woman portrayed.  When I saw it this morning,  I found it eloquent and heart breaking: the last of the subject's  words evoke the Old Testament of Job-ian dimensions, the first echoes Esau being conned by Jacob: “I am about to die; of what use is a birthright to me?"

With Roger's permission I've combined part of his explanation of the project from his website with post from last night.  If you’ve been "impacted by mountaintop removal mining or worked in the fight to end it," he'd love hear your story and photograph you (nude) in your ravaged landscape.  And, by the way, before he asked ask anyone else to pose nude for him, he went first in this short video.)

My point of entry as a photographer was an attempt to photograph the large-scale destruction of mountaintop removal mining in the coalfields of Central Appalachia. Overwhelmed and frustrated by the magnitude of what I was up against, the enormity of strip mining and the perceived threat of anyone speaking out against it, I stopped trying to make those pictures and moved on, but the issue was something I’ve never been able to move on from.

Now, I’m returning to the visual conversation of mountaintop removal mining with the series I’m tentatively calling Laid Bare, which introduces the nude form into the decimated landscapes left behind from this kind of mining. Framing form and land together to explore loss and vulnerability, I hope to collaborate in creating moments of beauty in the midst of vast destruction as a form of protest.

This past Saturday, in Mingo County, West Virginia...[a woman] told me part of her story. I trust you'll find it as powerful as I do.

The lawyer for Hobet Mine Company called me to say that, by the time the home place was divided amongst all the living heirs, there’d barely be enough land for each of us to have space for our own graves. I was a newly-separated mother of three living far away in Texas, trying to scrape up enough money for daycare and my kids’ school lunches. I sold my share to Hobet for $178.

Twelve of my childhood summers unfolded in that holler, in the house of my dead daddy’s parents—the closest thing to home I knew. The last time I’d been there before the lawyer called, both my granny, grandpa and great-granny were already dead, and kudzu was snaking up the outside walls of their houses, threatening attic windows. That day, as I drove out of there, carrying photographs, old land deeds and one of my grandpa’s mine pay envelopes with a forgotten dime pressed into its corner, a gigantic construction crane loomed over the mountain like a creature in a Japanese sci-fi film.

That was twenty-odd years ago.

Now, on the King Coal Highway, time has been carved away from these mountains until there is too much space, too much sky. I find myself in another country, thinking that we are not meant to be navigating these mountaintops so effortlessly. We were never meant to be up here at all, so near the sun in restless, rarified air that has become a constant wind. It’s as if the churned up ground has surrendered it stories into an eternal sigh that worries the leaves of trees we cannot name.

Let me lie down in these trembling grasses. Let the scouring wind find my skin. I will let the harsh sun burn me. I will listen for the pulse in the wound and answer it with my own.

Posted by Beth Wellington at 4:48 PM