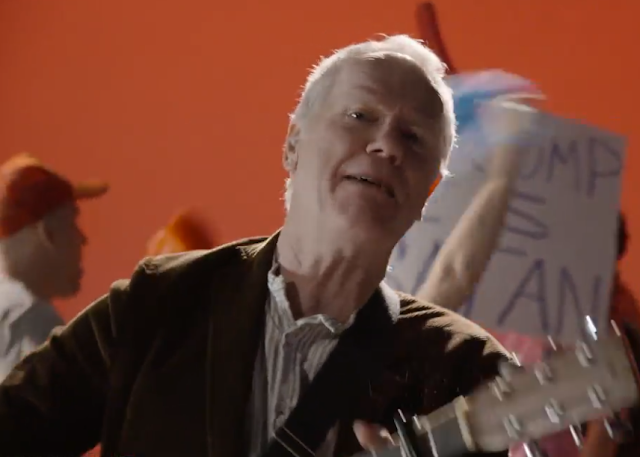 Screenshot of Loudon Wainwright III from his video "I Had A Dream," produced by Judd Apatow for Funny Or Die.

May 27, 2016, singer-songwriter Loudon Wainwright III  released his newest song on Soundcloud (of which I was the 31,880th listener) and as a single on Story Song Records.

Initially I didn’t want to write a song about Donald Trump but sometimes in the course of human events things get so weird that you can’t look a gift horse in the mouth, especially if the horse has a real mouth on him. In the past, I’ve taken pot shots in song at political figures of fun like Jesse Helms, Newt Gingrich, Bill & Hill, Bush, Cheney, et al., but folks - this is serious. We hold some truths to be self-evident and apparently Mr. Trump does not.

Soon, his frequent collaborator, filmmaker Judd Apatow had produced a video, which Funny or Die released  June 13.  (H/T to Rory O'Connor for pointing it out to me via Facebook.)  According to Paste Magazine, Apatow explains,

I got involved because I love Loudon Wainwright as much as I don’t love Trump....Hopefully this song will not make sense in a year—when Trump is back to running his prestigious university full time.

Here are the lyrics:


I had a dream - I don’t know what it meant,
But I dreamed Donald Trump was our president.
There on election night, right by his side -
His flunky Chris Christie, along for the ride.
But it gets worse - just wait, there’s more -
He made Jeff Sessions Secretary of War,
And, just like he promised, he built him that wall.
He blew up Cuba and he carpet bombed Montreal.


I had a dream - I woke up in a cold sweat -
The Donald was elected in a huge upset.
He made a bad deal with Putin, a secret pact with Assad.
He told the pope where to go - I swear to God.
As for the Supreme Court, he got to choose -
He filled the vacancy up with lyin’ Ted Cruz.
His face was bright orange, and his hair was just weird,
But we were made great again, embarrassed and feared.


Yeah, I had a dream, and here’s how it went -
I dreamed that the Trumpster was the president.
His little finger on the button, he was doin’ his thing -
Our new national anthem was “My Ding-a-ling.”
We were bought and sold, like in Monopoly -
He had the most hotels in the land of the free,
Locked up the opposition, and the demonstrators, too -
That would be me, and it might be you.


Dreams come true, and there’s prophesy,
And sometimes a nightmare is a reality. 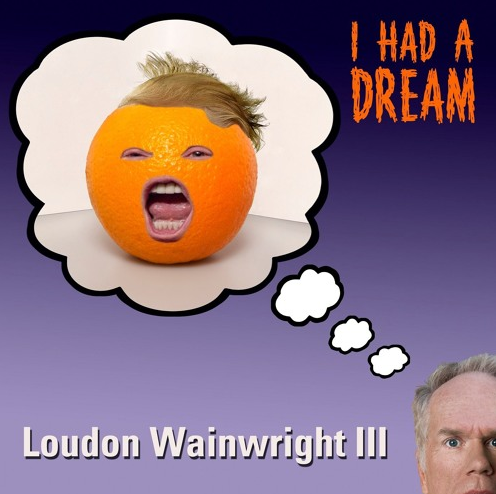 Posted by Beth Wellington at 5:21 PM