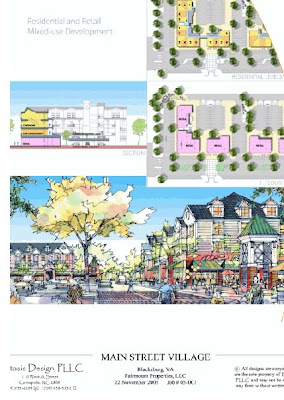 Illustration from application for rezoning submitted in a sucessful request for passage of Blacksburg's Ordinance 1412.

Barely a year has past since Virginia Supreme Court ruled on February 27, 2010 in Hale v. Board of Zoning Appeals in favor of the Town of Blacksburg and Blacksburg United for Responsible Growth (BURG) and against Fairmount Properties. Critics of Fairmount said it had used a bait and switch to secure rezoning of a rugby field next to the elementary school. The promise: upscale mixed use development including apartments. The plan submitted following rezoning: a shopping center "anchored" by a big-box Wal-Mart.

Richmond attorney Philip Strother (email), whose firm represented BURG in the case summed up the switch in the article he wrote for the University of Richmond Law Review. Peter Vieth also wrote about the decision March 16, 2009 for Virginia Lawyers Weekly.


Today, the Virginia State Senate with a Dem majority (of 22 - 18) unanimously passed the Republican-held House of Delegates' gift to developers, HB 1250, which lowers the threshold for vested rights to include cases in which

the zoning administrator or other administrative officer has issued a written order, requirement, decision or determination regarding the permissibility of a specific use or density of the landowner's property that is no longer subject to appeal and no longer subject to change, modification or reversal under subsection C of § 15.2-2311.

Writing about HB 1250 in "A letter isn't enough Lawmakers would make it easier for developers to sneak projects past public scrutiny," the Roanoke Times contended today that

It is the sort of rule only developers could love -- developers who prefer to sneak projects past elected officials without genuine public oversight.

The Roanoke Times also opined that

if this law had been in place a couple of years ago, Blacksburg almost certainly would have never been able to block a big-box store in town.

I'm not sure. After all, the Blacksburg case involved the failure of the developer to adequately specify use. Justice Lawrence L. Koontz Jr. ruled,

There is simply no language in the proffers and nothing in the attendant materials that were submitted with the rezoning application that would ‘specify use’ so that it could be found the developers clearly intended to reserve … a vested right for an unrestricted retail sales use of the property.

I checked w. Daniel Breslau of BURG and asked what exactly HB 1250 gives the developers and whether the provision would have applied to Fairmount. Daniel replied,

It's not clear if it would have changed the outcome in our case. But it could have. There were a series of letters between the developers and the Blacksburg zoning administrator in early 2007. The letters did not exactly give an order that a big box was permissible. But there was a big box in the plans and the zoning administrator did not list the big box among the things that were not OK in the plans. They tried to claim this was vesting under the existing law, but the courts did not buy it (although the BZA [Board of Zoning Appeals], which accepted every one of the developers' arguments and even invented some of their own, did). The issue is not as clear cut with the change. If the new bill becomes law, zoning administrators in Virginia will have to include a disclaimer in all of their correspondence with developers, saying that their letters are a courtesy and do not represent an "order, requirement, decision or determination," etc., unless their intention is to confer vested rights.

In some ways the law may backfire on developers. The more they try to ease the conditions for getting vested rights, the less any jurisdiction will want to approve a project without a very detailed and binding plan.

But, here's what I really don't get about the paper editorial--its warning that

Virginians who care about their communities should take notice before it is too late.

WTF? Why wait to warn us when it is within hours of being "too late." Where was a heads up when the measure was submitted by recently elected Virginia Beach hog farmer Barry Night on January 18 or when it passed the House on February 12? Daniel and otherswrote their Senators today and for what? We all would have appreciated at least the appearance of the ability to affect public policy if indeed the measure only benefits developers.

Oh, and by the way, the bill patron's website says he had a "strong dedication" "protecting citizens' rights." Here's my question for the good delegate:

Since when are developers, whom you count among your financial backers, the only citizens with rights, Mr. Night?

Update: former Goochland Andrew McRoberts , who served as Goochland's County Attorney through May 19, 2009, and now is part of the County and is now part of the Local Government practice at the law firm of Sands Anderson Marks & Miller, P.C. in Richmond (email, bio) posted on HB 1250 on March 2 at his informative blog, Virginia Local Government Law (and linked to me. Thanks!) His post looks at vested rights and the ramifications of the new bill and concludes:

whether HB 1250 benefits many or just a few, this step is a big change by its very nature. It is a step toward government in the dark to the detriment of the public will as expressed by its elected officials. A major shift, indeed.

Posted by Beth Wellington at 3:39 PM