NewsTrust: looking for how the recession is affecting New Yorkers 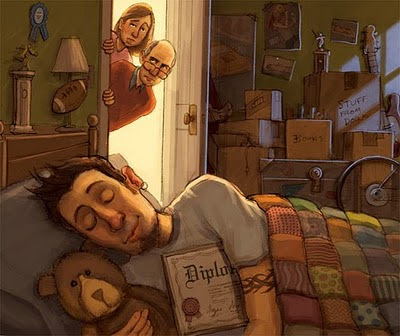 Illustration by Jonathan Keegan (website, email) from "Helicopter Parents Make Boomerang Kids" by an anonymous blogger with the nom de internet of "makeitadouble", an upstate NY "Dad, Writer, Poet, Sarcastic Malcontent" who also blogs here.
*
At the bottom of this post you'll find one of my reviews for today about how the recession is contributing to the phenonenom of boomerang kids. Thanks, in part to funding from the Omydar Network, NewsTrust will be spending the last two weeks in March rating local news coverage on how the recession is affecting New Yorkers. Some of you remember I served as community developer for NewsTrust back in 2008 and I've been hired to help w. this project. If you'd like to join us or have suggestions for sources or will be publishing on the topic, drop me a line.
*

During the New Hunt, we will review news and opinions on local economic issues ranging from unemployment to government cutbacks in New York City. Newstrust will be collaborating with the Huffington Post’s NYC portal and its Eyes and Ears team, as well as City Limits. Based on our collective ratings, we will feature the best (and worst) local news coverage and post them on the NewsTrust and HuffPo blogs on Wed. April 7th, 2010.

Starting this week, I'll be finding coverage and next week I'll be coordinating the coverage on goverment cutbacks. My assigned sources are:
Heading up the effort is NewsTrust associate editor Kaizar Campwala.

And of course, NewsTrust founder and Executive Director Fabrice Florin willl be handling the business end of things, as well as adding his reviews.

So here's a piece I reviewed today from Sam Roberts (article archive)
"Facing a Financial Pinch, and Moving In With Mom and Dad" by Sam Roberts, NYT.

Roberts, who has written other pieces on the recession's effects in NYC, cites examples of several young people living at home, a census analysis by the NYT (no link) and links to a survey from last fall by Pew and the census's current population survey. He quotes Andrew Beverage of CUNY. In all, a thorough piece which also provides the reader with resources to dig deeper.

BTW in 1985, Roberts was the the second recipient of the Fund for the City of New York's annual Peter Kihss Award for excellence in reporting about New York City government (now seemingly defunct--Kihss has won the first award in 1994, shortly before his death at the age of 72 Nicholas Pileggi (IMDB listing), contributing editor of New York magazine got the award in 1986. Pileggi, Nora Ephon's husband, is the author of Wiseguy: Life in a Mafia Family, which he adapted into the film Goodfellas. ):
Posted by Beth Wellington at 7:38 PM