Coal Ash is "Out of Control 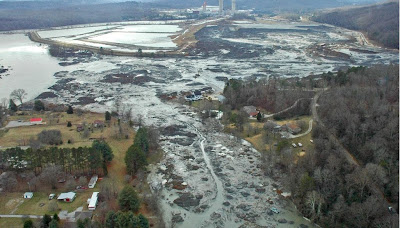 Cover image from Out of Control: Mounting Damages from Coal Ash Waste Sites, from the Environmental Integrity Project and Earthjustice February 24, 2010

Coal ash, a by-product of coal combustion of coal at power plants, gained national attention in December 22, 2008 when when TVA spilled 2.66 million pounds of 10 toxic pollutants into the nearby Emory and Clinch rivers -- more than all the surface-water discharges from all U.S. power plants in 2007, according to a December 2009 report by the Environmental Integrity Project, issued in time for a congressional hearing December 9, The One Year Anniversary of the Tennessee Valley Authority's Kingston Ash Slide: Evaluating Current Cleanup Progress and Assessing Future Environmental Goals.

The EPA had committed to issuing new requirements for coal combustion waste by the end of 2009--something that had been in the works since at least May 2000, partly as a result of inconsistencies in state requirements. In a press release issued December 17, however, EPA announced it would miss the 2009 deadline because

the agency is still actively clarifying and refining parts of the proposal.

Evidently, the rule is stalled at the Office of Management and Budget and a slew of lobbyists would like it to stay stalled. For instance, November 2, 2009, the Associated General Contractors of America asked EPA Administrator Lisa Jackson to slow down regarding regulation or at the least, to designate coal ash as non-hazardous because

even a conditional designation of coal combustion waste as hazardous would strongly discourage the construction industry from making the [sic] any beneficial use of such material in the future. At a minimum it would stigmatize all such material. It could also trigger a host of other regulatory requirements for the transportation of such material, and both requirements for the storage and handling of even small quantities. It could also frighten the surety and insurance industries, making bonds or insurance coverage for any beneficial use of such material either difficult or impossible to purchase. It could even trigger a wave of frivolous but still expensive litigation.

Interesting that the group writes about "small quantities" in the same letter that it boasts that the industry uses over 20 million metric tons of fly ash annually. Of course,
U.S. coal-fired power plants generate nearly 140 million tons of fly ash, scrubber sludge, and other combustion wastes every year.

One of WV's patron saints of coal, Governor Joe Manchin has chimed in to say the combustion waste should go unregulated:

Coal ash recycling is a multibillion dollar industry that provides thousands of truly green jobs across our country...Hastily raising its status to "hazardous" could actually cause more environmental harm and place undue financial burden on countless thousands of Americans.

And, while industry and its friends sees fly ash as "non-hazardous, " EPA indicated that coal ash dumps significantly increase risks to both people and wildlife: the EPA's 2007 risk assessment estimated that up to one in 50 residents living near certain wet ash ponds could get cancer due to arsenic contamination of drinking water. And a 2009 survey found "high hazard potential" at least 49 impoundments.

Now, the Environmental Integrity Project and Earth justice have released a February 24 report revealing that arsenic and other toxic pollutants have been found in water at coal ash 31 additional coal-ash contamination sites in 14 states (DE, FL, IL, IN, MD, MI, MT, NC, NM, NV, PA, SC, TN and WV) in addition to the 70 sites named in the EPA's justification for the pending rule. And the levels are up to 145 x the federal limits.

And my source for Congressional Research Service reports, Steven Aftergood of FAS, has promised me he will obtain and post a digital copy of a report on coal ash, probably in about a week. I'll post the link when it's available. Meanwhile, if you want a paper copy, you can write your Senator or Congressperson: