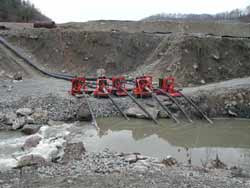 The above photo from OHVEC taken in March of 2001, shows the pumps on Wolf Creek, five months after the Martin County sludge spill. Here's that draft of my June 2004 article I promised on Jack Spadaro, who lost his job trying to hold Massey accountable.

“I’m hoping that this problem I’ve had will show people how utterly corrupt the Bush administration is. I’m a perfectly law abiding citizen who was doing his job well for thirty years and they storm troop my office and lock me out of my office,” Jack Spadaro, former superintendent of the Department of Labor Mine Safety and Health Administration’s (MSHA) National Mine Health and Safety Academy, told the NRFP in an interview June 16.

On June 4, 2003, government agents entered Spadaro's office in Beckley West Virginia, went through his files, locked him out and placed him on administrative leave. Spadaro had accused the Bush administration of whitewashing the investigation into the October 2000 Martin County, KY sludge spill. Twenty-five times the size of the Exxon Valdez disaster, the Massey Energy sludge spill included hazardous chemicals, including arsenic and mercury. The failed impoundment polluted 100 miles of stream all the way to the Ohio River.

Spadaro had also complained that the new administration doled out lucrative contracts for work at the academy to friends. One contract, for a training program, was worth nearly $200,000. MSHA denied violating the law, but Spadaro told the NRFP they divided the program into 186 smaller contracts.

During their initial investigation, Spadaro and his colleagues discovered records of a 1994 spill at the same impoundment. Massey claimed it had taken corrective measures, but a company engineer said the problem had not been fixed, and that both he and Massey knew another spill was inevitable. It turned out that there was less than 20 feet of rock between the mine workings and an old flooded mine serving to hold mine, but the company had told the government there was a solid coal barrier, at least 70 to 80 feet wide.

Originally, the team wanted to cite the company for ten violations. Spadaro told the NRFP that once Bush took office “the change was dramatic.” The team members had been conducting a “clean, objective, forward-moving investigation.” After the inauguration, they received “instructions to limit the scope.” Spadaro complained on April 11 and 16. Then in October 2001, his new boss, Bush appointee Dave Lauriski called twice and and insisted he sign a watered down version of the report. “He said , ‘I'm in a hard spot and we need your name on the report.” Spadaro told Lauriski that since they weren’t allowed to complete the investigation that “your best bet is to strike my name and go on and publish it without me.”

The final report cited Massey Energy for only two violations, and the company had to pay approximately $110,000 in fines. Massey had been a generous contributor to the Republican Party. According to Public Campaign, a non-profit, non-partisan organization, "Buck" Harless, a board member of Massey Energy, was a Bush "pioneer", who pledged to raise at least $100,000 for the Bush campaign. He and his family alone have given nearly $70,000 to Bush and the Republican National Committee since 1999.

Lauriski was a former executive with Energy West Mining Company and Interwest Mining Company. Davitt McAteer, who had headed MSHA under Clinton when the disaster happened, had come from an entirely different background. He had served as executive director of the Occupational Safety and Health Law Center, a public interest law firm. He had also worked as an attorney with the Center for the Study of Responsive Law and as Solicitor of Safety for the United Mine Workers of America.

In October 2003, the government took steps to fire Spadaro, sayng he had abused his authority, failed to follow procedures, and used his government credit card without authorization. Spadaro denies all the charges.In November, investigative journalist Phillip Babich wrote an extensive article for the on-line magazine, Salon, and Spadaro received coverage on the National Public Radio program Living on Earth. Then on November 18, Representatives George Miller, D-CA, Robert Andrews, D-NJ and Major Owens, D-NY, all members of the House Committee on Education and the Workforce requested that Secretary of Labor Elaine Chao provide them with information to assess whether Spadaro is being wrongly terminated.

In their letter to Chao, they wrote: “Obviously Mr. Spadaro’s status as a whistleblower—questioning the conduct of the Martin County Coal investigation and the Department’s use of no-bid contracts with friends and associates of Department officials—raisers a very serious concern about the nature of the current disciplinary investigation against him.”

On a cold Tuesday this January, 60 people rallied outside the downtown Charleston, W.Va. post office to help the Friends of the Mountains (a coalition of mountaintop removal opponents) kick off its “ Bring Back Jack Campaign,” which is still in progress. According to the Ohio Valley Environmental Coalition (OHVEC), Spadaro is “a rare person--a coal industry regulator who actually regulates the industry and works to protect miners and coalfield residents from the industry's excesses. Over his 30-year career, which began with investigating the causes of the 1972 Buffalo Creek tragedy, Jack has earned the trust and admiration of many Appalachians.”
OHVEC wrote, “It appears to us that Jack was placed on administrative leave…because he dared to delve into the truth about the coal sludge disaster and the Mine Safety and Health Administration’s (MSHA) role in that disaster.”

On February 17, the West Virginia Environmental Council presented Spadaro with its public service award. After talking about the threats to the environment faced in Appalachia, Spadaro acknowledged the public support he has received. “Finally, I want to tell you that your letters, public demonstrations, e-mails, and words of support have sustained me through the past eight months as I have fought to keep my job and continue my life's work. When I was at my lowest, you took up my fight. You helped to restore my energy and determination. I am forever indebted to you for your kindness and concern.”

MSHA officials told Spadaro in late February that he's not being fired. Instead, they want to demote him, cut his pay by $35,000 and transfer him to the agency's Pittsburgh office. That transfer has been stayed while the Office of Special Counsel for Whistleblower Protection investigates at Spadaro’s request.. He told the NRFP that he is concerned that the office has let attorneys from the Department of Labor sit in on the interviews and that there is “an intimidation factor—you can’t get unfettered interviews.” No representative for Spadaro has been allowed to attend. The spokesperson for the office would provide no information to the NRFP, citing its policy to neither comment on an open case nor to confirm whether a case is open.

The Labor Department's inspector general is looking into whether or not MSHA officials broke the law in awarding government contracts. Spadaro says that the report confirms all the charges but has not been released. He speculates that Chao wants to hold up release of the report until Congress’ August recess.

If he doesn't receive satisfaction from the Department of Labor or the Office of the Special Counsel, he plans to appeal to the U. S. Merit Systems Protection Board.
Spadaro’s plight has attracted the attention of Robert F. Kennedy, Jr., writing in The Nation, of the National Audubon Society’s Magazine and of Sixty Minutes, which aired a Bob Simon interview on April 6. Spadaro told Simon he has no plans to go anywhere. “I think that they thought they could simply roll over me, and I would be gone and out of their way,” he said. “But I'm gonna fight them forever if it takes it.”

To help with the “Bring Back Jack” campaign, readers can call or fax the Office of the Special Counsel on Spadaro’s behalf. They can write Representative Miller, West Virginia Senator Byrd and their senators and congressmen. For details and links to media coverage, see OHVEC's page on Spadaro.
Posted by Beth Wellington at 11:42 PM