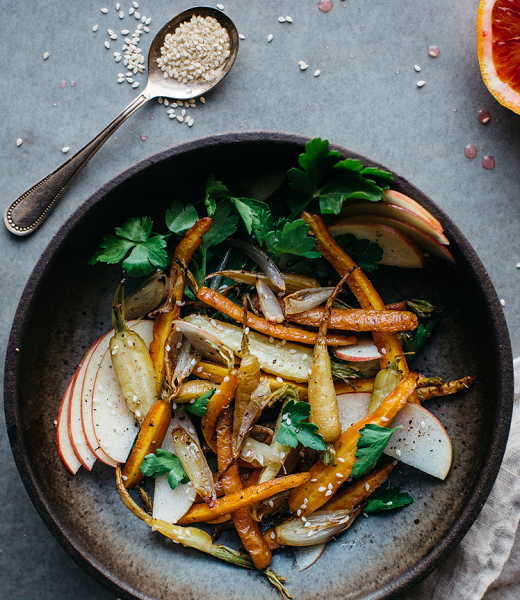 Sally asked me to have the recipe ready early for Glade Road Growing's last 2015 farm share on 11/24.  She says the share will be similar to last week with plenty of carrots and that maybe I could provide a recipe for Thanksgiving dinner, so I thought a roasted carrot salad would be nice.  Lindsey Love has such great photographs on her food blog that I thought I'd share this one, although her recipe (which only serves two) includes shallots and blood oranges and has fennel seeds rather than peanuts and parsley instead of cilantro.


1.  Scrub and roast 1 pound of carrots and half a pound of peeled small onions with the root end cut off   at 475 degrees F for about 20 minutes either in a preheated oven on a cookie sheet lined in parchment paper or, as I do, on a countertop convection oven.

2.  While carrots and onions are roasting, squeeze one orange for the juice into a large bowl. If you like you can also grate about a half a tablespoon of the zest off the orange peel.  Wash two apples, cut in quarters to remove core and then slice thinly with a sharp knife.  Add apples to bowl and toss with the orange juice to keep them from turning brown.   Chop  1/2 cup of fresh cilantro and reserve for topping.

3.  Smash and peel 4 cloves of garlic and chop coarsely.  Chop about a tablespoon of fresh ginger root.

4.  In an oiled cast iron skillet toast 2 tablespoons of sesame seeds until they turn light tan and begin to pop.  Remove them from skillet.  Add enough extra virgin olive oil to coat bottom of skillet and saute the garlic and the ginger until tender.  Let cool a bit and then toss sesame seeds and garlic and ginger with apples.

5.  When the carrots and onions are finished roasting, let cool enough that you can handle them comfortably.  Split the carrots in half lengthwise if they are small.  If they are larger, you may want to cut them in half crosswise and then in quarters lengthwise.  Cut the onions in half and then slice thinly.

6.  Toss in the bowl with the apples and 2 tablespoons of extra virgin olive oil.  Top with roasted unsalted peanuts and cilantro and serve warm or at room temperature.


Posted by Beth Wellington at 7:39 PM