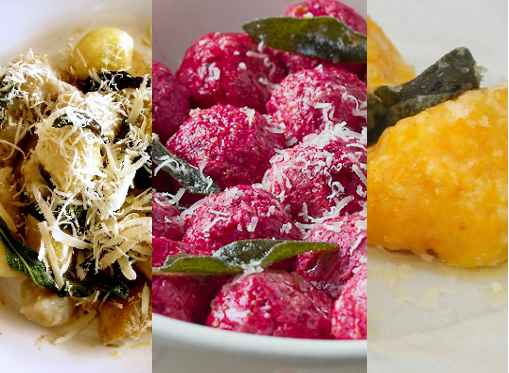 Montage made from photographs from three food blogs(l. to r. by Suzie Castello, Nealey Dozier Thompson and  Cooking with Manuela.) *

The potatoes made me decide to make gnocchi, the Italian version of a dumpling.  Doing some research, I learned that the squash and beets would be suitable, too.  I decided to make all three for a lovely tri-colored plate of pasta, sauteed in sage butter and topped with grated cheese .

If you like you could try the same idea with spätzle (recipes for potato, beets and squash) the German version, a softer dumpling, which is quicker and easier, since you push the dough through a colander or large-holed grater, rather than form the dumplings individually.  The latter are traditionally sauteed in butter and topped with parsley.  Or they're delicious tossed with sauteed greens and topped with goat cheese, the way Bryan Picard makes his at the Bite House Restaurant on Cape Breton Island (that's the beet recipe I included at the link.)

It would also be fun to do three types of ravioli. (recipes for potato, beets and pumpkin, which could substitute winter squash).


1.  The night before, drain one pound of whole milk ricotta in a colander lined in cheese cloth over a bowl.

2.  Preheat the oven to 475 degrees F.  Scrub the potatoes and 2 small or 1 medium beet and wash the delicata squash.  Cut the delicata squash in half and scoop out the seeds, which you can roast and salt.  Place veggies on a parchment lined rimmed cookie sheet, with the squash cut side down.  Roast the veggies until soft.  You can also roast the veggies in a countertop convection oven.

3.  Slip the peel off the potatoes and beets.  In separate bowls, pass them through a potato ricer, food mill or grate them over the large holes of a box grater, washing the utensil between uses to keep the colors separate. Scoop the squash from its skin and do the same.  The squash has more moisture, so you may want to drain the results through a clean tea towel in the colander.

4.  For the beet dough, add the drained ricotta, 1 egg and 1 cup of freshly grated Parmesan cheese, salt and salt and freshly ground black pepper to the beets. Mix well with a wooden spoon. Add 2/3 cup of white whole wheat flour flour to the ricotta mixture and whisk together to mix. Set the mixture aside for a minimum of 2 hours in the refrigerator.  After it is chilled you will form the dough into  balls about the size of a ping pong ball. Roll the ball into a bowl of flour, carefully turning to lightly coat all sides, tapping off any excess. Lay each dumpling on a parchment-lined baking sheet. Continue forming the gnocchi until all the mixture is gone.

5.  For the squash dough, the proportion is 1.5 cups of the flour to 2.5 cups of the squash and 1 egg.  If you have less, adjust the flour and egg accordingly.  Mix the squash with 1/2 teaspoon of nutmeg, the eggs and a little bit of salt. Add the flour a bit at at the time, until you find the right consistency.

6.  To make the potato dough, the ratio is 2 cup of white whole wheat flour to 3 pounds of potatoes  and 1 egg.  Make well in center of the potatoes in the first bowl and sprinkle all over with flour.  Place egg and a pinch of salt in center of well and using a fork, stir into flour and vegetable, just like making normal pasta. Once egg is mixed in, bring dough together, kneading gently until a ball is formed. Knead gently another 4 minutes until ball is dry to touch. Roll baseball-sized ball of dough into 3/4-inch diameter dowels and cut dowels into 1-inch long pieces.   Roll into balls if you want the shape to match the other gnocchi.  Or for the traditional shape, just flick the 1-inch long pieces off of  a fork.

7.  Bring a large pot of salted water to a boil and reduce to a simmer. To make the squash gnocchi, use two teaspoons to drop small amounts of the mixture into the simmering water. You probably will need to do this in three or four batches, depending on how big is your pot.  Put few enough in at a time so that they have space to move and don't stick to each other.  when they float to the surface,  cook for another 2 minutes.   Remove them to a plate covered in a paper towel to remove and extra moisture.

8.  You will cook the beet gnocchi the same way.  Using a slotted spoon, remove them to a plate covered in a paper towel to remove and extra moisture.

9.  To cook the potato gnocchi, pepare an ice bath to cool them.  Drop a small amount into boiling water and cook until they float (about 1 minute). Meanwhile, continue with remaining dough.  For these, as soon as the gnocchi float to top of the boiling water, remove them to ice bath. Continue until all have been cooled off. Let sit several minutes in bath and drain from ice and water.

10.  Melt butter in a skillet with fresh sage leaves. Let the butter lightly brown and the sage leaves become nice and crispy, about 10 minutes.  Toss in the gnocchi to warm and then serve topped with grated Parmesan cheese.


Posted by Beth Wellington at 3:27 PM