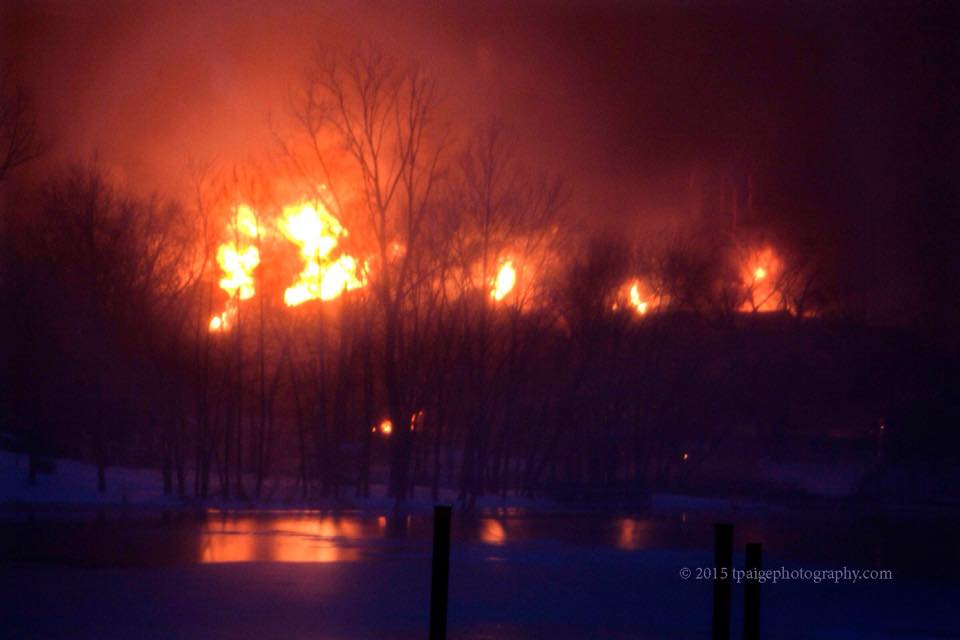 1:30 p.m. on Monday, Feb. 16, 2015, firefighters and emergency crews responded to a train derailment in Montgomery, WV. Within an hour, officials were evacuating the towns of Adena Village and Boomer Bottom, near Mount Carbon and Deepwater. Lawrence Messina, communications director for the West Virginia Department of Military Affairs and Public Safety, told media that at least one tanker, believed to contain crude oil, had fallen into the Kanawha River. As a result, officials shut down Route 61 and set up a shelter at Valley Elementary School for folks in the two towns being evacuated in Powellton Hollow.

By this morning Ken Ward, Jr. of the Charleston Gazette, along with his fellow reporter Rusty Marks, who had broken the story for the paper, were telling us that the train, belonging CSX, was still aflame,  having set"at least one house" and power lines "ablaze...causing numerous tank cars" of the 107 it had been hauling to burn and explode.  The train, tranporting Bakken Shale crude oil from North Dakota, was slated for a terminal in Yorktown, Virginia." Appalachian Power spokeswoman Jeri Matheney told Ward and Marks that electricity has not yet been restored to about 900 customers and FEMA said that about 2,400 folks had been evacuated or displaced.

They noted other derailments include one in April 2014 in Lynchburg along the same route, another in Quebec in July 2013, in which a  74-car train carrying Bakken Shale crude oil killed 47, an another on February 14, 2015 in Northern Ontario, enroute from Alberta to eastern Canada.

If I can get a permalink for the story from Ken, I'll substitute the one above, which may be ephemeral.  Meanwhile, my friend, photographer (and eloquent essayist and public speaker)  Paul Corbit Brown (website) a native of Fayette County, wrote me this morning and offered his essay, along with the above photo from another friend,  songwriter and photographer T. Paige Dalporto, who lives in Charlton Heights, WV.

I had been planning to write about the derailment, having posted a comment to Facebook at one o'clock this  morning, "The more things change...two top stories in the news right now: WV for ecological disaster and NSA for spying...sigh." Since I'm writing from Salem, VA, I thought, I'd instead, turn this space over to Paul Corbit.

If you're wondering about the history of Powellton Hollow and coal, see the website of Chris DellaMea, of Beckley, WV, who has visited more than 400 coal towns in that state and Pennsylvania, Maryland and Ohio.

More than a train will be derailed before this is over:

By now I'm sure most of you know about the train that derailed and the ensuing explosions in Fayette County, WV today. We are told it was carrying around 109 tankers filled with crude oil from North Dakota and headed for a destination in VA. Surrounding communities have been evacuated, it is believed that at least one tanker and possibly more have actually fallen into the Kanawha River. Six massive explosions so far, and one home completely destroyed. Water intakes for at least two PSDs on the Kanawha were closed as a result of the crude oil and other possible contaminants entering the river. More than 200 residents are in a shelter tonight.

My prediction is that politicians like Joe Manchin will quietly welcome this event while they appear to be surprised on TV. Some of you might wonder why. Manchin has often been heard saying that these things (such as mine fatalities and environmental disasters) have got to stop. Like his predecessor Arch Moore, he acts as if these things truly are unavoidable "acts of God". Right about now, the wheels on that Ill-fated CSX train have stopped spinning, but the real spin is soon to appear. Soon we will see politicians pointing to this and other recent train disasters involving crude oil while we hear them extolling the "benefits" and "safety" of the Keystone XL pipeline. Manchin is personally on a mission to see to it that there is a veto-proof Senate in the event that Obama does veto the KXL.

Manchin will likely act saddened by this, the-most-recent-environmental-disaster, to his beloved state (the one he calls an extraction state, the rest of WV still calls our home the Mountain State) and he will talk about the "common sense" approach, and how common sense would dictate that we choose the safer of the two alternatives for moving the deadly tar sands oil from Canada to the Gulf of Mexico. This is where the Truth will be derailed, once again. Just like all the great tricksters of the past and the present, he and his ilk will frame the debate as the safest of two options, while omitting the third (and ONLY SAFE) option: leave the tar sands in the ground.

While Manchin has at least enough sense to admit that Climate Change is real AND influenced by humans, he refuses to let these common sense facts guide him when it comes to decisions regarding the extraction and exploitation of fossil fuels. But at least he's in good company here in WV. Within weeks of opening the most recent legislative session, the republican led House and Senate have proposed and are working to push through legislation that will not raise the minimum wage, destroy prevailing wages, undermine healthcare, set our education system back decades, get rid of renewable energy initiatives in the state, strip the tank safety law from last year (to the point the 90% or more of the tanks in WV are exempt), further intrude on women's rights to make their own decisions about their bodies, protect coal companies from lawsuits involving fatalities, further relax safety laws, and (as if this wasn't enough) they are working to downgrade the classification of WV waters. This last one is more dangerous than it might seem at first. Downgrading water standards is BAD for public health and good for dirty businesses. They are working to make sure Manchin's motto of "Open for Business" becomes a reality, but only for dirty businesses (like fracking and coal) that need a river or landscape for deposit of their waste.

Rebecca Randolph and the WV Manufacturers Association believe WV needs to relax its water quality and other environmental laws in order to be competitive. Competitive to what!?!? The most polluted places in America?!?! It's remarkable to me that the politicians and industries that run this state continue to insist that the only way we can remain competitive is to allow our state to be a cesspool for industry. Our state has produced trillions of dollars in coal, yet the 5 counties in WV that produce the most coal continue to be among the poorest counties in the entire US. Republicans have convinced us this is because of the Democrats' control of WV. I beg you to look for yourself, it has nothing to do with absurd Party Politics and everything to do with being a resource colony. This is the same situation in any place where "natural resources" are prized more than "human resources". Quick question: "How does it feel to see the value of your life and the life of those you love compared to a lump of coal, a gallon of gas or some shiny stone?" Don't answer right away, just think about it.

I'd like to live in a WV where we compete to have businesses that care about the environment AND the quality of life for the people they employ and the generations to come. That is a competition worthy of our state and her people. As a state, we are at the bottom of every list for quality of life. The reason is simple, it has nothing to do with red, blue, race, religion or lack thereof. There is only one real reason: Everything that was ever built in this state by the government and predominant coal industry that owns the government, was built to take wealth OUT of WV: All of it. We are left with decaying infrastructure, broken bones, broken homes, broken communities, poverty, sickness and death.

The true colors of West Virginia are not those manipulated by politicians. Our colors are the colors of Strength, Determination, Creativity, and Perseverance. It's no wonder they want to keep us broken, if we as a People ever once realized our power and stood United, WE would run the show.

The choice is quite simple: "Stay broken and in thrall to poverty, sickness and pollution; or, Rise Up! and run these rascals out on the same rails that stole our wealth and our health."

Posted by Beth Wellington at 2:30 PM