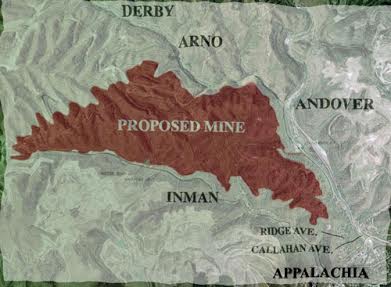 I'm humbled by the many who have been helping me get back (eventually) to my beloved town and region (by choice, if not roots).... December 10  a driver shattered a pedestrian's  two legs and shoulder  in a crosswalk in Blacksburg.  Said walker (me) is grateful to have survived and checked in last night to a very good rehab after some missteps (says the woman who has yet to take another step since the collision.) Tonight I'm back for a short entry after too long offline.  Graphic from this webpage available for upload thanks to the smart phone of fellow journalist aka techno-amanuensis Bob Stepno, who continues to help me as he has on facebook, now that I'm no longer being held incommunicado.

The courts, the EPA, and even the Army Corps of Engineers and the Virginia Department of Mines Minerals and Energy giveth hope to those who would preserve what's left of the south-central Appalacian Mountains.  The coal companies would taketh away that hope and the mountains.

Ison Rock Ridge Mountain in Wise County, Virginia shelters the mountain communities of Derby, Arno, Inman, Andover and Appalachia, providing freshwater to over 1,800 people there and many more who live downsteam.

Almost  6 years ago, on May 7, 2009, the U.S. Army Corps of Engineers suspended its approval of A and G Coal Corp.’s 1,200 acre Surface Mine 0.8 miles west of Andover. The Sierra Club and Southern Appalachian Mountain Stewards had  sued to block the permit and the Corps stated that the suspension would give officials "an opportunity to fully evaluate concerns" raised by EPA April 3, 2009.

Want to keep up on this and other Virginia government hearings.  Go to https://www.townhall.virginia.gov/.
Posted by Beth Wellington at 9:28 PM