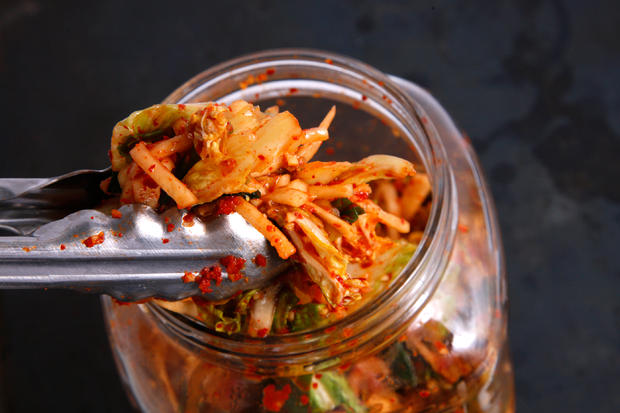 Photo accompanied Christine Gallary's recipe for kimchi when she was food editor in the test kitchen at Chow.  She is  now the Food and Cooking Editor at The Kitchn.

The 10/21/14 farm share from Glade Road Growing is slated to include napa cabbage, head lettuce, daikon or watermelon radish, hot and green sweet peppers,cilantro and carrots.  Sally asked if I could provide a kimchi recipe. Kimchi is a condiment of fermented vegetables seasoned with ginger, garlic, chile, and fresh or preserved seafood. Traditionally it was made in large quantities and buried to ferment for at least several months.

This  same-day version, even quicker than Gallary's, is adapted from Lilian Chou's recipe from when she was an editor at the late, great Gourmet.  Like Gallary, Chou uses fish sauce to deepen the flavor quickly. I like her recipe for her use sesame seeds, as well as grated Asian pear instead of sugar.  If you want a hotter version, instead of the pear you can follow Gallary's lead and use 1 1/2 teaspoons demerara sugar and 1/2 pound of the daikon radish, peeled and cut into 2-inch matchsticks.

This recipe will make about 2 quarts.  You can keep your kimchi in the fridge in lidded mason jar(s) and  it will grow stronger as it ages. If you are going to age it for at least several days to a week, you can follow Gallary's lead and add 2 teaspoons Korean salted fish for a more authentic flavor.

1.  Quarter the napa cabbage lengthwise, then cut crosswise into 2-to 3-inch pieces. Toss it with 3 tablespoons sea salt in a large bowl and let it stand, tossing occasionally, for 2 hours.  Rinse well and drain.  Squeeze out excess water with your hands and transfer to a large bowl.

2.  Toast 3 TB of sesame seeds in a lightly oiled cast skillet until they start to pop and remove from heat.

3.  Chop one bunch of scallions enough to make one cup.

5.  Cut one large Asian pear in half and remove stem, core and seeds.  Grate on large holes of a box grater, add to cabbage and toss.

6.  Marinate at least an hour.

There are many kinds of kimchi, as oulined in this brochure from a museum devoted to the condiment in Korea.    Here are some family recipes by Korean-born  Emily Kim who lives in Manhattan and posts under the moniker Maangchi — hammer in Korean — a name she used while playing the online game "City of Heroes."

If you'd like a milder recipe that uses the carrots, cabbage, cilantro and red peppers, you can make a slaw from the napa, inspired by either of these recipes from last year:
Or if you like Salvadorian food, the carrots and cabbage are delicious in curtido (pictured below), a pickled slaw served with pupusas.  You can find recipes for both here. 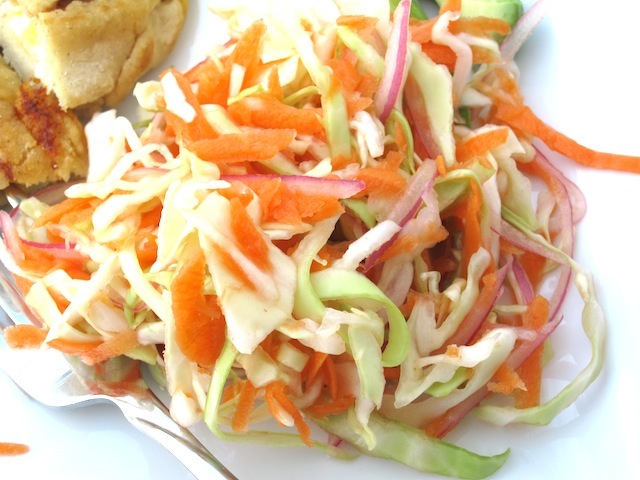