The Destruction of Blair Mountain and How to Oppose It 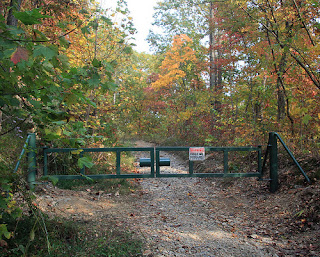 Kenny King took this  photo of a new metal gate on the dirt road running north from Route 17 at Blair Gap and says he encountered armed guards patrolling there.  The following piece was commissioned by The Guardian, where it was published as "Fighting the battle of Blair Mountain:  The struggle to conserve from stripmining the historic site of a labour struggle in West Virginia could not be more symbolic."  The only link I've changed is the one for "Battle of Blair Mountain."  The editor added one to wikipedia--I prefer one to Tim Thornton's series in the RT.  Another minor edit in that paragraph deleted my link to WSJ coverage of  the suits against Massey for poisoning water.
*

Last week, with Massey Energy under siege from federal safety officials, yet still proposing to stripmine the site of the Battle of Blair Mountain, I recalled standing on battlefields at Gettysburg and Manassas, haunted as the landscape somehow revealed what had once happened there. I was listening to David Rovics sing:

The hills of West Virginia will long remember… the Battle of Blair Mountain.

A Massey subsidiary, the Aracoma Coal Company, is seeking a permit to obliterate a 554-acre site that includes parts of the battlefield in West Virginia. This land bears traces of the second largest insurrection after the Civil War – and the largest labour uprising – in US history. Here, in 1921, the miners of West Virginia, seeking the right to unionise (that is, organise, assemble and speak freely), took on the coal operators and their mercenaries.
According to historic preservationist Barbara Rasmussen, the origins of the battle of Blair Mountain lay in anger over conditions in the southern coalfields, where the "company store" system ruled and unions had been denied the right to organise. The 2 August 1921 shooting in cold blood of Matewan police chief Sid Hatfield by mine operators' agents provided the spark. A year earlier, Hatfield had defended the miners when the Stone Mountain Coal Co tried to evict striking workers from their homes. After several weeks of protest and unrest, battle lines were drawn on 26 August 1921; ten days later, the rebellion was over. Michael Meador describes the melee:

As many as 15,000 men were involved, an unknown number were killed or wounded, bombs were dropped, trains were stolen, stores were plundered, a county was invaded and another was under siege. The president had to send in federal troops...

The miners' rising was suppressed, after an estimated million rounds were fired. The defeat was a setback for the unionisation campaign in the short term, but raised public awareness of the appalling conditions borne by miners and paved the way for the political victory of full recognition of union rights under the New Deal in 1933.
You'd think the crests, the narrow valleys below, would be a historic shrine – like other national battlefields preserved by the Park Service. In an article for the magazine Preservation, the DC-based journalist Christopher Swope has described, "a land of rippling ridges and deep, shady hollows. Coated in oaks and black locusts, Blair Mountain rises just a bit higher than what surrounds it."
The National Trust for Historic Preservation listed the battlefield as endangered in 2006. For years, miners' descendants have confronted a new generation of coal operators, and now, as of this November, a new private army has appeared in place. Kenny King – whose grandfather fought with the United Mine Workers – reports, "armed guards… patrolling the dirt road running north from Route 17 at Blair Gap… a [new] metal gate… on the same road, with a sign that warns the area is under video surveillance."
King has been tireless for decades in seeking artifacts to document the history of the battlefield. Since 2006, he has been joined by scholars such as archeologist Harvard Ayers, Barbara Rasmussen and West Virginia native Brandon Nida. The battlefield gained its listing in 2009 by the National Park Service on its National Register of Historic Places.
That accomplishment, however, was soon undone – when lawyers for the coal industry convinced West Virginia state officials to ask the Park Service to delist the site, claiming, after the deadline, to have found additional opponents to the listing.
In July this year, Friends of Blair Mountain – a grassroots group of scholars and activists – reported bulldozers had started to destroy the archeological sites described in the application for listing. The National Trust, Ohio Valley Environmental Coalition and Sierra Club filed a petition with the National Park Service to re-list Blair Mountain on the National Register of Historic Places. In late July, the petition was denied. On 9 September, the Sierra Club, the Ohio Valley Environmental Coalition, Friends of Blair Mountain and the West Virginia Labor History Association filed a legal challenge to contest the site's removal from the National Register. The call on the National Park Service to re-list Blair Mountain has been echoed by a coalition of musicians (David Rovics and Hazel Dickens), filmmakers (John Sayles, director of Matewan, and Barbara Kopple), authors (Denise Giardina) and scholars.
As Brandon Nida wrote me:

The miners were rebelling over brutal living and working conditions after a generation of oppression and severe exploitation. Today, putting armed guards hired by the coal companies at Blair Mountain is like rubbing salt in an old wound. The history is still in our consciousness, and on top of all the destruction going on in Appalachia, this has really upset community members in the area.

• If you wish to register your objection to the destruction of the Blair Mountain battlefield site, there is an online petition to the National Park Service. More urgently, though, the Friends of Blair Mountain asks for people to write to the West Virginia Department of Environmental Protection, requesting that it deny Massey's mountaintop removal permit. Letters must arrive no later than 26 November 2010, and should include the applicant's name (Aracoma Coal Company, Inc) and the application number (S-5035-08); if you write, please describe your perspective and why you disagree with a permit being issued, and mail to:

Posted by Beth Wellington at 1:52 PM