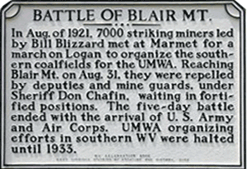 Folks may remember the Battle of Blair Mountain from  the 1987 John Sayles film, Matewan, or the 1987 Denise Giardina novel Storming Heaven, or the 2004 Diane Gilliam Fisher poetry collection Kettle Bottom. I hadn't realized that the number of UMWA workers shrunk from 50,000 to 600 after the battle, or that the army had enthusiastically sent 17 planes to strafe American citizens until I read a 2006 Roanoke Times article, "Roanoke proudly plays a bit role in the battle," in a series by Tim Thorton commemorating the 85th anniversary of the battle.


As Sue Sturgis of Southern Exposure describes it:


Back in 1921, more than 7,000 miners outraged over working conditions in southern West Virginia's coalfields faced off against an army of some 3,000 police backed by the coal companies in an effort to bring in the union.

When the fight that came to be known as the Battle of Blair Mountain ended five days later after President Harding called in the U.S. Army, anywhere from a dozen to a hundred miners lay dead, along with as many as 30 people from the other side. It was the largest open class war in U.S. history, and the country's largest armed insurrection aside from the Civil War.

Now  there's the spooky echo of company thugs attacking local families, as the mining company has hired security guards in preparation for mtr mining on the historic site of the battle, where mining is being contested because of its possible status as a historic landmark.

CEO  Don Blankenship  got the 2009 historic designation reversed on a technicality  that more landowners opposed the designation.  Some say that his count was hinky and the matter is back in the Courts.

Blankenship, of course, is infamous for running the first mine EVER  shut down by the Labor Department for safety violations and the mine disaster this past April, which has rumors flying of Massey's possible sale.

There's all this fervor by historians to protect civil war sites from Wal-mart or Disney.  How about they come to the aid of  Friends of Blair Mountain and prevent our history from being blown to smithereens as a mountaintop removal site.
Posted by Beth Wellington at 2:01 PM