So will we get health reform or just complain about being sold out again? 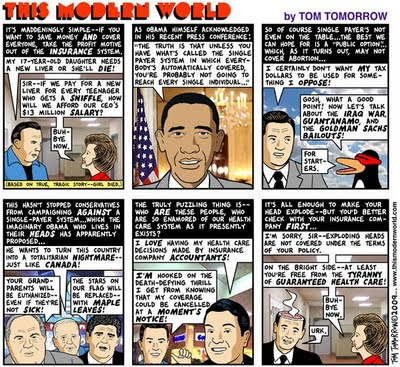 Yesterday, Krugman has another column on health care (and various other sell outs by the Obama administration) Obama’s Trust Problem, in which he writes,

According to news reports, the Obama administration — which seemed, over the weekend, to be backing away from the “public option” for health insurance — is shocked and surprised at the furious reaction from progressives.

Meanwhile in the "manufacturing of consent," as Noam Chomsky likes to say, the right of center
Polictico and even further right of center The Hill, both chime w. glee in on the House leadership, at least in the form of Steny Hoyer saying the public option may have to go.

With things unfolding this way, the dour Matt Taibbi looks positively prescient for his column "The Health Care Bill Dies?" published in the new True/Slant July 28.

Who among us did not know this would happen? It’s been clear from the start that the Democrats would make a great show of doing something real, then they would fold prematurely, ram through some piece-of-shit bill with some incremental/worthless change in it, and then in the end blame everything on Max Baucus and Bill Nelson, saying, “By golly, we tried our best!”

So what to do. FireDogLake is doing a good job of trying to hold folks feet to the fire and Glenn Greenwald reports that $300,000 has been raised to bolster the spine of those who have thus far promised to reject any healthcare bill without a public option.

Will this be enough. Or have we grown used to fighting the noble fight, but losing? As Taibbi wrote,

Make no mistake, this has nothing to do with Max Baucus, Ben Nelson, or anyone else. If the Obama administration wanted to pass a real health care bill, they would do what George Bush and Tom DeLay did in the first six-odd years of this decade whenever they wanted to pass some nightmare piece of legislation (ie the Prescription Drug Bill or CAFTA): they would take the recalcitrant legislators blocking their path into a back room at the Capitol, and beat them with rubber hoses until they changed their minds.

The reason a real health-care bill is not going to get passed is simple: because nobody in Washington really wants it. There is insufficient political will to get it done. It doesn’t matter that it’s an urgent national calamity, that it is plainly obvious to anyone with an IQ over 8 that our system could not possibly be worse and needs to be fixed very soon, and that, moreover, the only people opposing a real reform bill are a pitifully small number of executives in the insurance industry who stand to lose the chance for a fifth summer house if this thing passes.

Posted by Beth Wellington at 5:46 PM