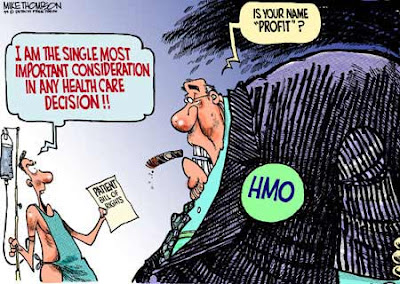 ~
Other than the death of conservative pundit and and defiant Valerie Plame outer Robert Novack, Memeorandum leads off today w. yesterday's "Alternate Plan as Health Option Muddies Debate" by the NYT's Robert Pear and Gardiner Harris. The alternative being health care co-ops, the original plan being a public option. The WaPo, stating opinion as fact in a news story describes prospects pf the public option as fading.Ironicallly, the WSJ seemed more evenhanded, at least in this story.

Of course, the public option is not single payer advocated by Physicians for a National Health Program, just a weak facsimile. Or as Paul Krugman wrote in "The Swiss Menace," for the NYT August 16

If we were starting from scratch we probably wouldn’t have chosen this route. True “socialized medicine” would undoubtedly cost less, and a straightforward extension of Medicare-type coverage to all Americans would probably be cheaper than a Swiss-style system...

But a Swiss-style system of universal coverage would be a vast improvement on what we have now. And we already know that such systems work.

So we can do this. At this point, all that stands in the way of universal health care in America are the greed of the medical-industrial complex, the lies of the right-wing propaganda machine, and the gullibility of voters who believe those lies.

Even this weak tea has drawn orchestrated protests--see the leaked organizing town hall action memo of Bob MacGuffie of www.rightprinciples.com who volunteers with the lobbying group Freedom Works. MacGuffie stirs his cauldron with talk of "socialism."

And on June 17, Open Secrets analyzed the money involved.

And yet, Obama is backing away from even the public option, floating the idea of substituting cooperatives, as explained by Timothy Stoltzfus Jost:

The biggest problem is coming up with a network. You have to find doctors and hospitals and negotiate contracts. Most are already locked up by the dominant insurers. They’re not going to give you — a tiny co-op — a better deal. That’s assuming they’ll deal with you at all. The alternative would be to rent a network, but you’re basically buying your product from your competitor. There’s no way you’ll get a good deal there, either.

Jost (email, bio) a law professor at W&L in Lexington, Virginia has written on numerous essays on health care, including the feasibility of establishing health insurance co-ops. In his piece, "Trigger Happy: Don't Kill the Public Plan Choice," he notes,

Private health insurance premiums have doubled over the past 9 years, 4 times the rate at which wages have increased. Competition, the engine that drives down costs in our economy, has largely disappeared in the insurance industry. The top two insurers control 65% or more of the small business market in 31 states. In local markets, where health insurance is actually bought, business is even more concentrated. In Harrisonburg, Virginia, my home, one insurer controls 85% of small business insurance.

Actually my premiums have gone up about 450% in a dozen years, despite moving to a county with lower rates: a combination of age and the fact that Anthem has stopped selling "my" plan, although it has one just like it, for which I cannot apply because I now have a pre-existing condition. Thus, the pool of insured, on which my premium is based, grows older and sicker, even faster than average.

The Politico, as Jane Hamsher noted August 17, paints any attempt by the House to hold on to single payer as theater. She counters this by noting that on July 30, 57 signed onto a letter saying that they wouldn't vote for a bill that omitted the public option. Another three added their name to a letter dated August 17 to Health Secretary Sibelius:

We stand in strong opposition to your statement that the public option is "not the essential element" of comprehensive reform. The opportunity to improve access to healthcare is a onetime opportunity. Americans deserve reform that is real-not smoke and mirrors. We cannot rely solely on the insurance companies' good faith efforts to provide for our constituents. A robust public option is essential, if we are to ensure that all Americans can receive healthcare that is accessible, guaranteed and of high-quality.

To take the public option off the table would be a grave error; passage in the House of Representatives depends upon inclusion of it.

We have attached, for your review, a letter from 60 Members of Congress who are firm in their Position that any legislation that moves forward through both chambers, and into a final proposal for the President's signature, MUST contain a public option.

(Of course, the House also said it would never allow immunity for telecoms that participated in Bush's wiretaps without warrants. And we know how that ended.)

You can't have reform without a public option...If you really want to fix the health-care system, you've got to give the public the choice of having such an option. If you don't want to have the public option, you most certainly shouldn't spend $60 billion a year subsidizing the health-insurance industry.

BTW, at a town hall meeting, the 9th District's Congressman Rick Boucher, too, appears to be leaning towards cooperatives. The Pulaski gathering today drew 1200, according to the Roanoke Times. My friend Lydia attended and described the the meeting as follows:

People are really uninformed and a bit crazy - they don't want to be confused with facts. ... the crowd's rudeness, anger, and stupidity truly made me feel sick to my stomach.

Makes me wonder who stirred them up. What Krugman wrote bears repeating,

At this point, all that stands in the way of universal health care in America are the greed of the medical-industrial complex, the lies of the right-wing propaganda machine, and the gullibility of voters who believe those lies.

Posted by Beth Wellington at 6:00 PM