Who Profits from Fear? 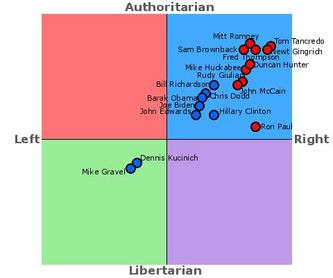 The Political Compass and U.S. Presidential Politics: Was tagging old entries this evening and looking up current versions of sites I had liked. This is an update from Political Compass. I had taken the test in 2006 and landed near the center, a bit left libertarian, the quadrant for Nelson Mandela and Gandhi , or Mozart, all of whom I regard as fine and admirable company. As the authors explain,

If we recognise that this is essentially an economic line it's fine, as far as it goes. We can show, for example, Stalin, Mao Tse Tung and Pol Pot, with their commitment to a totally controlled economy, on the hard left. Socialists like Mahatma Gandhi and Robert Mugabe would occupy a less extreme leftist position. Margaret Thatcher would be well over to the right, but further right still would be someone like that ultimate free marketeer, General Pinochet.

the social dimension is also important in politics. That's the one that the mere left-right scale doesn't adequately address. So we've added one, ranging in positions from extreme authoritarian to extreme libertarian.

Just to show the state of American politics, I'm left of any of the presidential candidates except Kucinich and Gravel, neither of whom would be my choice for this office. The skewing brings to my mind that quote about the American eagle needing both left and right wings to fly. Mario Savio attributes it to Jessee Jackson. Or there's the Pat Paulsen version:

Assuming either the Left Wing or the Right Wing gained control of the country, it would probably fly around in circles.

In looking at particular candidates, I'm interested how tight a cluster there is for the Democratic Party candidates (again, other than Kucinich and Gravel.) And that Edwards and Clinton are the most libertarian. Also that Ron Paul, who considers himself the libertarian falls above the dividing line. Contrast his placement with that of a conservative libertarian, Milton Friedman, on this chart:

An aside about Paulsen: according to his memorial he came in second in the 1996 New Hampshire Presidential Primary (makes me wonder how Colbert would have done if SC Dems had let him on the ticket.) And although I did not find the context for the above quotation, I found a site which includes his political editorials, as well as a now dead link I've revived thanks to the Internet Archive to Paulsen's quite serious answers to the 1996 Presidential Primary Natioinal Political Awareness Test from Project Vote Smart.

Since it's 9-11, I'll provide some content devoted to terror: How's this for Keystone Kops? NYC will deter nuclear attack with concentric circles of Geiger counters according to the New York Times today in "Suburban Police Enlisted to Help Protect the City" by Corey Kilgannon. Don't you feel safer now?

The counters didn't work so well in the latest dirty bomb scare. According to "MTA didn't tell us of dirty bomb scare: officers," by Alison Gendar in the NY Daily News on September 10, one officer who works at the Verrazano Bridge complained,

They'll give us two weeks of training for how to collect tolls, making sure we charge a three-axle truck more than a two-axle, but no field training on what a bomb might look like, how to stop cars or use this radiation detector.

Meanwhile, besides Geiger counters, LA is spending its homeland security money on robots and portable media hubs, according to Richard Winton in the September 9 LA Times.

I guess it all comes down to fear being a great motivator for letting loose the purse strings.

And speaking of fear: John Judis (email) had an interesting piece in the the New Republic August 17 explaining why West Virginia supported Bush. In "How Political Psychology Explains Bush's Ghastly Success. Death Grip" (referred to here), he writes about research since the early 1980s by Sheldon Solomon, Jeff Greenberg, and Tom Pyszczynski (interview, article, research), who developed "terror management theory."


Their experiments showed that the mere thought of one's mortality can trigger a range of emotions--from disdain for other races, religions, and nations, to a preference for charismatic over pragmatic leaders, to a heightened attraction to traditional mores.

It seems that this tendency could be counteracted, if folks were asked to think as rationally as possible. (Not something the current administration espouses.)

On the poetry front: again, with regard to 9-11, Tillie wrote me to say he'd mentioned my poem, "Windows on the World" on his blog entry today.

Other mention on the net:

My journalism on Memeorandum: Just found out that my August 22, 2007 post at WV Blue, "Suit by West Virginia Protesters Reveals Bush Tactics," got a link from Memeorandum.com. The topic is the 2002 Bush advance manual for handling dissent. For those of you who haven't seen Memeorandum, it aggregates political news around memes.
Posted by Beth Wellington at 9:03 PM