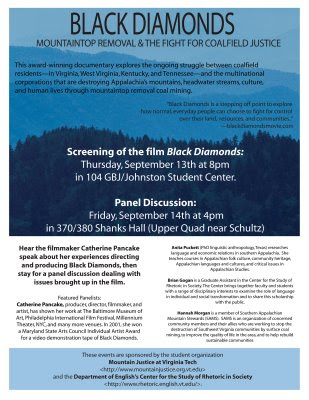 Photoshopped version of the Mountain Justice flyer for the film showing at Virginia Tech September 14 and a panel the next day.

Here's the sidebar article I turned in today for the New River Voice:, which will accompany the MTR article I submitted yesterday.

*
Catherine Pancake came to Blacksburg August 14 for a panel discussion of her compelling and comprehensive 2006 film, Black Diamonds: Mountaintop Removal and the Fight for Coalfield Justice, winner of this year’s Jack Spadaro Award from the Appalachian Studies Association.

As a child, the West Virginia native accompanied her father, a minister, to strip mine sites and listened to him call the destruction a sin and a crime. Then Congress passed the Surface Mining Control and Reclamation Act in 1977, meant to stem the damage, Jimmy Carter signed the measure into law and Pancake eventually moved to Baltimore. So, when her sister, author Ann Pancake, passed along emails from an academic list-serve, saying coal companies were blowing up the mountains, it seemed unbelievable. Convinced by her sister to come down and shoot some footage, she imagined, back in March, 2000, a short film used to somehow publicize and stop the destruction of mountain life. Soon, Pancake realized she had embarked on making a full-length documentary, spending much of her free time during the next years driving six hours each way and capturing MTR’s story as told from the points of view of affected residents, politicians and the industry.

Talking to people in their homes, at mining sites and at Charleston protests, Pancake follows every claim of injustice or mistreatment with support in the form of visual documentation or a graphic citing information from state and regulatory agencies. She interviews lawyers, government officials and scientists who explain why they oppose the practice and the obstacles to ending it. And when Pancake interviews industry spokesmen and sympathetic politicians, she makes their spin and disinformation transparent.

Anyone who wants to understand the history and gravity of MTR should view this film and show it to your friends. For showings and ordering information, see:
To read an entensive feature based on interviews with Pancake and activists in the film by Baltimore City Paper’s arts editor, Bret McCabe.

Posted by Beth Wellington at 6:33 PM