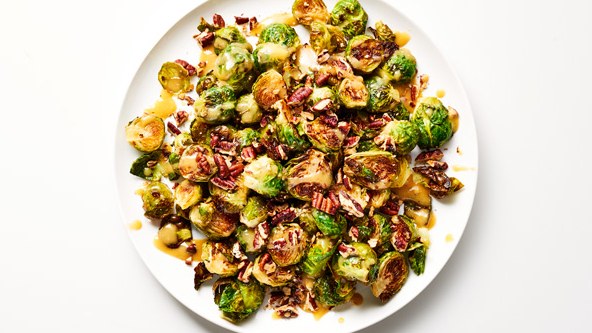 The photo was at the website for Bon Appétit Magazine -- no photographer credited. *
Ooh. This looked good. So I made up a recipe, even though my recipe duties are done for Glade Road Growing are done for the year and my Brussels sprouts from Catawba Valley Farms are long gone since Leighton Hodges stops bringing produce to the Blacksburg Farmers Market in October.


1. Toast pecans in a single layer until fragrant in a small dry cast iron skillet that has been heated until a bead of water will evaporate. Let cool.

2. Toss Brussels sprouts in 3 TB oil. Arrange sprouts, cut sides down, on baking sheet (or in stainless steel steamer basket if using a countertop convection over and roast until tender

3. Meanwhile,, whisk mustard, miso, maple syrup, and vinegar in a small bowl. Gradually whisk in remaining 3 Tbsp. oil until dressing is thick and emulsified, then whisk in wate. a little at a time, to thin. Season with salt and pepper.

4. Once Brussels sprouts are cool enough to handle, transfer to a platter and drizzle with miso dressing. Top with toasted pecans.
Posted by Beth Wellington at 10:55 AM