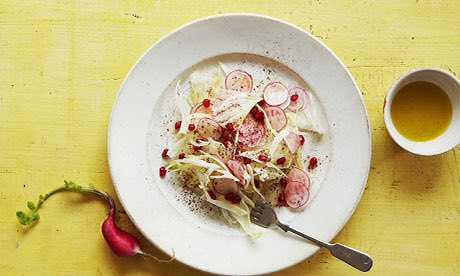 Photo by Yuki Sugiura  for The Guardian.

The Guardian had this lovely picture by London based photographer Yuki Sugiura of a salad with fennel and radishes with pomegranate seeds.  Given the season and what's available locally, might I suggest strawberries instead?  I've seasoned this salad with ground sumac, often added to Mediterranean and Middle Eastern cooking to add tartness.  While the staff at Eats told me that they don't stock sumac in their bulk spices, they suggest you might try Oasis.  You can also harvest sumac here in the fall.  (Poison sumac has white berries, but for more identification, see this post from the Ashville, NC foraging company, No Taste Like Home.)

1.  Wash the fennel and trim the root end off the bulb and discard.  Trim off the stems and fronds and cut the bulb into quarters  and slice thinly.  Place in a bowl of cold water with 1 tablespoon of the lime juice to keep from discoloring.  Reserve stems and fronds for another purpose.  (I like to coarsely chop and steam the stems and puree them like I would celery in soups.  I like to puree the fronds with nuts, olive oil and Parmesan, Romano or Asiago cheese to make a pesto.)

2.  Wash the radishes and trim off the roots and discard. Trim off the leaves, if any and finely slice the radishes.  If there are leaves, you can use reserve them for another use.  (I like to chop and saute them, as I would turnip greens.  They also add a peppery taste to salads.)

3.  Wash the strawberries, drain immediately.  Trim off the top stem and leaves.  Cut in halves, or quarters, if large.

3.  To make dressing, whisk the oil and remaining lime juice together.

4.  Drain the fennel and toss gently with the radishes and strawberries. Drizzle over the dressing and serve on individual plates, dusted with sumac and a little salt.  Serve immediately.

Posted by Beth Wellington at 9:56 PM