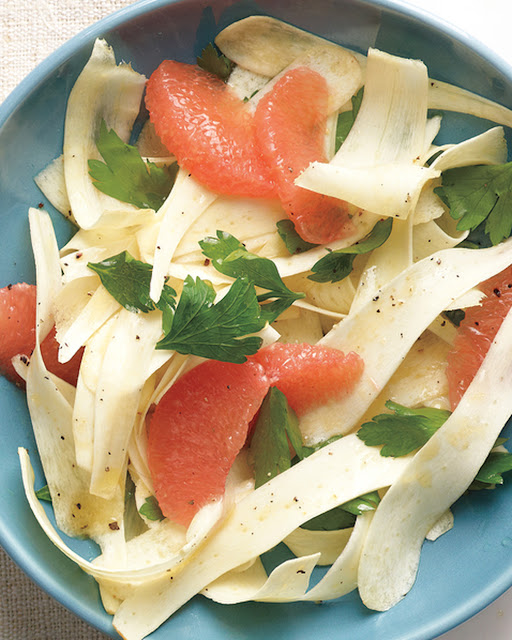 Sally tells me that Glade Road Growing's farm share this week will include parsnips and other root veggies.  Parsnips, which are a native of Eurasia, are closely related to carrots and parsley.  They are  delicious roasted, steamed, sauted or raw.  They make a nice addition to stews.

While there won't be the pound and a half of parsnips called for in the original recipe, you can use the other root veggies in the share such as turnips and carrots. I've substituted cilantro for parsley, lime juice for vinegar, maple syrup for honey  and added some green onions.

This salad would be nice served on a bed of arugula or other greens.  If you want to make this a main dish, you could add two cups of cooked white or black beans.  For meat eaters, this salad would be a great side for roasted chicken, duck, turkey or pork.  It would also be great accompaniment for tuna or salmon.

1.  Working over a large bowl, cut out grapefruit segments, setting the membranes aside.  Squeeze 1/4 cup juice from membranes and discard the membranes. Whisk in oil, lime juice, honey or syrup, salt and pepper into the grapefruit juice and add to bowl.

2.  With a vegetable peeler, shave the root vegetables  on the diagonal into strips. Add to bowl and toss, along with cilantro and green onions and toss.