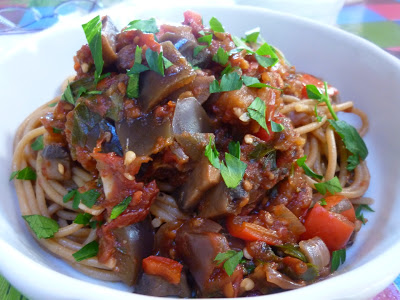 
The expected bag of vegetables from Glade Road Growing for the week of July 21 will include: tomatoes, cucumbers, carrots, cilantro, garlic, and an eggplant.  This recipe includes the tomatoes, cucumber, cilantro, garlic and eggplant.  With days getting hotter, you may want to prepare the cooked parts of this pasta salad in the early morning while it is still cooler and then serve it in the evening for dinner.


1.  Wash and dice one unpeeled eggplant.  Place in a steamer basket and sprinkle generously with salt and toss to distribute salt.  Let sit in the sink for at least 15 minutes until the eggplant sweats.

2.  Peel and smash and finely chop garlic and  and one or more large portobello mushroom caps.

3.  While eggplant is sweating, bring water salted water with a tablespoon of extra virgin olive oil to a boil.  Add 4 ounces of whole wheat spaghetti and return to boil.  Cook for about 7 minutes or until al dente.  Drain pasta, reserving water in the pot to cook the eggplant.  Toss pasta with a bit more olive oil and set aside to cool and then chill in the refrigerator.

4.  Leaving the eggplant in the steamer basket, rinse off salt.  Bring pasta water back to a slow boil and steam eggplant until cooked - about 10 minutes.

5.  In a skillet, heat olive oil and stir in 1/8 teaspoon of pepper flakes, garlic and chopped mushrooms and cook until soft and add eggplant and cook for another five minutes to meld flavors.  Cool and toss cooked veggies with pasta and refrigerate.

6.  Chop tomatoes,  1/2 cup of cilantro leaves,  cucumber with skins on (but seeds removed if too large) and mince about 1 tablespoon of raw onions.

7.  Divide the pasta and veggie mixture among four small bowls.    If you would like this to be a main dish, you can also add in at least a half cup of cooked, chilled chickpeas or lentils  to each bowl. Garnish with raw veggies and with olives and feta cheese, if desired.

Posted by Beth Wellington at 4:47 PM