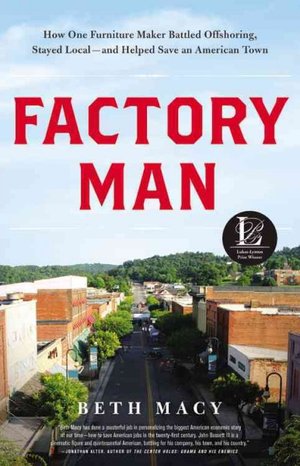 Today is the publishing date for Beth Macy﻿'s first book, Factory Man (Little, Brown and Company, 464 pp) about John D. Bassett III, who got run off from Bassett Furniture in a family feud and instead of leaving the industry,started the smaller Vaughan-Bassett in nearby Galax, Virginia where he now employs 700.

...has promised the town that they're going to be hiring more people. Just last year - maybe it was in '12 - they reopened a vacant plant next door and christened it Vaughan-Bassett II. And they're trying to get ready. The housing market still hasn't come back up from the recession. I mean, it's kind of been the last thing to come back. And, you know, he was telling me this week that he had just read something - that wasn't really going to come fully black till 2017.

Last year, he broke even. This year, I think he's a little bit behind, but as he points out, we have a ...[balance] sheet at the rock of Gibraltar. You know, he's been very frugal. He's - he calls it Bassett 101 - you know, the techniques he learned from his father and his grandfather, in terms of, you know, having a lot of money in the bank and being very careful with his investments. And he's just determined he's going to keep that factory going because when the economy does come back and housing starts to improve, he's going to be poised to be what he calls the last girl standing on the desert island. You know, he's going to out-wait everybody. He's going to be the last guy. And he's going to get the business because no matter how good-looking you are, it doesn't matter. If you're the last one standing, you are going to get the business.

Factory Man started out in 2011 as  "Picking Up the Pieces,"  a  series on the effects of globalization on the towns of that once hosted the textile and furniture industries in Virginia, which Beth  wrote while she was a reporter for the Roanoke Times. As she writes for Nieman Storyboard:

For the next three years, I spent most of my waking moments turning that three-part series into a 120,000-word book, Factory Man: How One Furniture Maker Battled Offshoring, Stayed Local — and Helped Save an American Town....

Among the reporting challenges I faced were American CEOs who avoided the press, Chinese businessmen who claimed that speaking candidly to me could jeopardize their profits, and a painful early chapter on race that kept me awake at night struggling with The Big Questions: Does it matter? Is it fair? A decades-long family feud gave the story an undercurrent and a universal element, but it was also the single topic my brash main character didn’t want to discuss (in fact, he grew agitated every time I brought it up).

Macy left the paper in May, in order to devote her time to writing books.  Her next one is scheduled to come out in 2016.  Her last piece  for the Roanoke Times, "After the shouting: Macy shares a final chapter" came out June 8, updating a 1993 piece "Pregnant and Proud." (interview with Beverly Amsler, WVTF.)

In October 2013, Chris Roush published "Turning a business feature into a book" on his blog Talking Biz News. In December 2013, the Ochberg Society printed an interview on how how the book developed including how she dealt with reluctant sources: "‘People get that you’re in it for the long haul’: Beth Macy and Factory Man."  Madelyn Rosenberg has an interview here.

You can check out Beth's blog, Intrepid Paper Girl for links to Factory Man reviews. and events.  For videos on the book, check out the video channel of her husband Tom Landon of Lucky Dog Productions LLC.

And don't forget the IPA/Macy tie-in from Parkway Brewing Company. 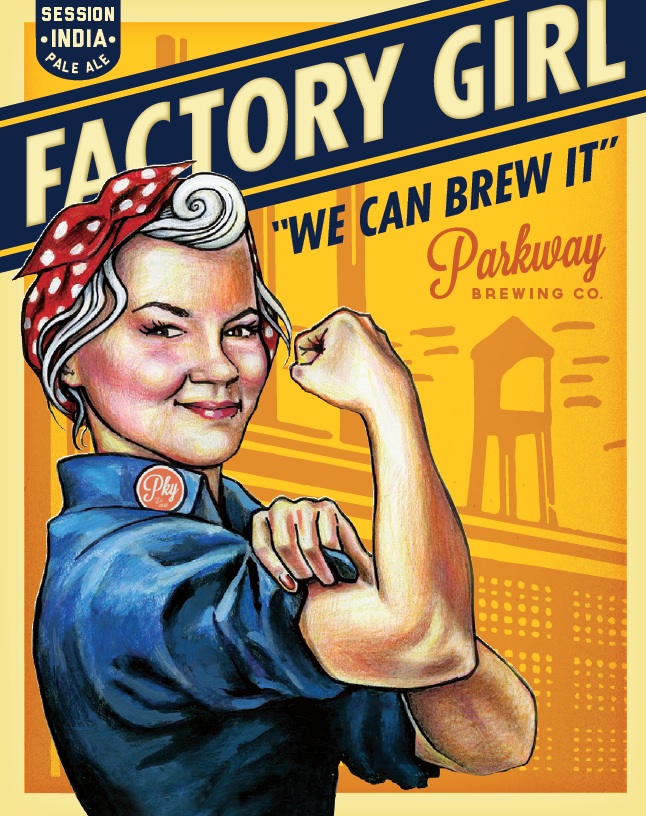 Posted by Beth Wellington at 5:32 PM