Carnival of Journalism: Letter to My Younger Self 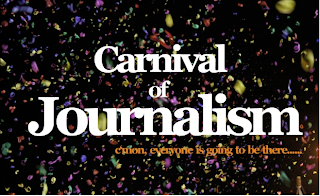 David Cohn wrote us November 12 to let us know that Shaminder Dulai would be  December's host, after the revived carnival covered the topic of modernizing college journalism organizations in November.  This months prompt was to write a letter to your younger self.

Don't worry.  Things will work out.

You'll do fine with your career.  You won't always seem to have a plan, but if you pursue what engages you, your resume will make sense and if someone seems like they wouldn't want to hire you if you were truly yourself, you wouldn't want to work there anyway.  Your gift will be the abilities to connect the small daily details to a larger picture with the patience to pursue it and to entice folks to work with you, not for you. That's because you are neither a follower nor a leader n the conventional sense.  If your family fear for your path or others belittle it, lovingly ignore them.

You will be able to make a home anywhere.  You'll be able to be frugal with style.  You'll love to travel, even solo.  But it's worth it to have a base of operations, be it a tiny house or a modest shared apartment with someone companionable.

I only found this out lately, when I moved earlier this month into a new apartment in downtown Blacksburg. I feel at home for the first time in years.  (The apartment is one of 5 or six owned by a local man--not a real estate conglomerate--in an older building.  It has wood floors and interesting details:  a built in bookcase in the living room and a Spanish arch leading into tiny kitchen that features  built-in spice shelves, plenty of cabinets and a wall of windows and windowed-door out onto a small landing which will be fun for eating out come warmer weather.  It's around the corner from the natural foods grocery and a few blocks from the college library and our not-for-profit movie theater and concert venue.)

The former occupant left me the most comfortable queen size bed in a room that fills with light each morning. I've bought my first orchid--a rescue from Kroger's manager's special section. The remaining roommate is a pleasure to be around.  The last time I lived with someone whose company I enjoyed, it was a boyfriend who traveled for work and wanted no more than he could load into his Ford Ranger truck.

That boyfriend and I spent our last four years together in a furnished apartment in a problematic neighborhood in Roanoke.  I wanted to buy a bargain of a house next to my friends in Gainsboro or at least move to an unfurnished apartment and buy furniture--I knew I could find something cheap secondhand and told him we could always give it away or donate it back to the Habitat Home Store or the Thrift Shop.

He vetoed all this and eventually moved on.  I used to miss him for little things, like the pleasure of buying him a bag of pepper and sea salt kettle chips I knew he'd enjoy.  Ironically he now has bought a house near where I took him to see the Baby O's play for their fortieth season in Bluefield before the team moved 13 years later to Sarasota. I like to think I got him started on his way to this domestic bliss by introducing him to an 8" Lodge cast iron skillet as an alternative to Teflon and a Pyrex covered casserole instead of those disposable aluminum foil baking pans.  (He did buy me a Vitamix blender which I still have)

All these years later, I've bought that second-hand furniture from the YMCA Thrift Shop (a place with some great finds that makes TJ Maxx prices look like Macy's.).  It panicked me when the apartment before this one didn't work out and I had to move.  But you know what? I found the much better place where I live now and two friends helped me move the lilac-upholstered armchair, the two vaguely art-nouveau dining room chairs, the two oak desk chairs, the full-sized file cabinet, the white student desk with the delft china knobs, the Galloping Gourmet convection roaster and the twin size bed.

One of those friends is invited to dinner with her husband as soon as they get back from the holiday trip to visit family.  She already gave me a duck to keep in the freezer to roast for them (they run a local CSA farm and I think she might have bartered it for  the chickens that they raise.)

I've got goat sausage and stew meat I bought from another local farmer to feed the other friend when he gets back from his travels out west.  He's got lots of tools and he's promised to help me modify the twin bed frame, so it can be a trundle day bed and we put up company in style.

The little desk fits perfectly in the kitchen as a workspace with a third of the surface dedicated as a stand for my roommate's microwave.  The fridge is filled with homemade soups and various cheeses and the freezer--besides that duck and goat--is filled with frozen fruit to make sorbet and grains to grind to flour in the Vitamix.

And I even found a comfy upholstered loveseat more to scale with the living room when I was in Roanoke AND a kind stranger from the town next to mine who offered to deliver it in his van if I would ferry his bicycle in my station wagon. And, yes, he liked the idea of coming over for dinner with his wife after the holidays are done.

In some ways you'll be there with us, too.


Posted by Beth Wellington at 9:30 PM