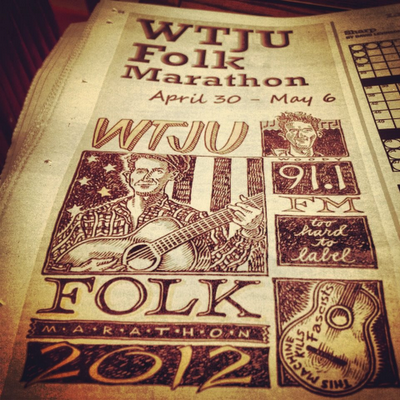 Illustration is from WTJU Folk Marathon publicity of the Tshirt design by graphic artist Frank Riccio (portfolio, email).  Riccio helps host a program at the station and is affiliated with Virginia Book Arts and the McGuffey Arts Center in Charlottesville.  This entry was first published at 11:59 am on 5/6/12 and last updated 12:55 pm  on 6/12.

I'm a big fan of Morwenna Lasko and Jay Pun of Charlottesville ever since hearing them at a November 2011 house concert at Monkeyhouse in Blacksburg (thanks, Robyn and Jim!)  Here's a link to a video of the Berklee grads playing the Millenium Stage at the Kennedy Center in August 11, 2011.


So, of course, I was glad to tune in (podcasts online for two weeks) to hear them when they told me (the link is to their promo...I actually got an email) they would be special guest hosts playing a selection of the artists who help influence their own sound. for the 2012 Folk Marathon.

Peter Jones, folk director for the station explains this year's theme, “Too Hard To Label”


...we will be focusing on five of our favorite music labels: Smithsonian Folkways, Signature Sounds, Compass, Rounder and Rebel. And in honor of Woody Guthrie's 100th birthday, we will do a few shows in his honor...Not only have our regular announcers come up with the usual line up of special programs, but several musicians from the community are doing programs....

If possible, I was even happier to learn that my friend Joe Overton was one of those musicians, hosting the next segment after Morwenna and Pun's--local folk, old-time and bluegrass acts he had chosen, mostly younger acts, although he started with "Leaving Tennessee" by Mike Seeger and Tim O'Brien off of the Third Annual Farewell Reunion. The biggest treat was hearing him play live with Erin Johnson of Belle Star.

I met Joe when Willie Dodson and I stopped by to see him at his home in Tennessee on our way down to the Southern Climate Convergence near Asheville long before he moved to Charlottesville.  (All three of us oppose so-called mountaintop removal and Willie and Joe play together in the Here's to the Long Haul.). So, I decided to donate in memory of Irene McKinney, the late poet laureate of WV, who was also an opponent of MTR.

And then I learned as I continued to listen that there was a fretless banjo special with Joe Ayers. And on and on. I listened all the way until midnight.I'd encourage anyone who loves old time and folk music to join me in supporting the station.   How great that you can listen on demand for those two weeks. I KNOW what I'm going to listen to tomorrow.

Here's a picture of Morwenna and Jay when they played Blacksburg's Stepping Out in 2010.  (Copyrighted image used by permission with all rights reserved.)  They'll be back for 2012 at 5:00 on August 3, playing as the "MoJa Quartet" featuring Pete Spaar on upright bass and Devonne Harris on drums. 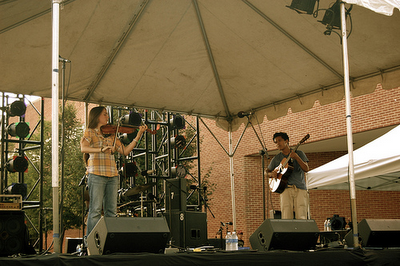 Here's a picture of Joe Ayers. 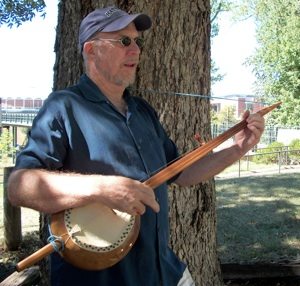 And here's a picture of my friend Joe (far right) with another of his bands, The Clear Blue Sky. Posted by Beth Wellington at 11:59 AM

Hey, thanks! It was a joy to program this past week's marathon schedule, and yesterday's shows were no exception. Not only do we have some wonderful regular announcers, but also a very supportive local music community. I encourage everyone to check out the complete schedule at http://wtju.net/record/toohardtolabel.

Thanks for taking time to comment, Peter! What a great line up y'all have...