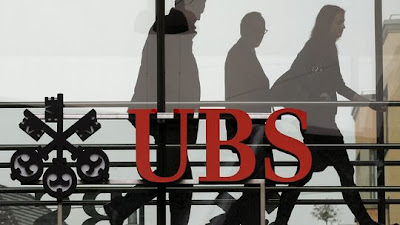 It began with a mountain of letters and red hearts made out of paper: unknown people had placed them in front of the entrance of a UBS Branche in Knoxville, Tennessee.

“We love our mountains” was written on these letters, or “Your greed brought us here”. 3 Weeks later, on the 8thof March 2012 the next campaign took place in front of the UBS Building of Johnson City, Tennessee. It was a small campaign, a Reporter of Johnson City Press counted 40 People. Protesters knocked on the glas door holding signs saying “Better Invest in our Future” or “UBS finances Destruction” or “no coal”. An approaching Policeman send people away from private parking zones.

In Chattanooga and Oak Ridge, in Asheville or Lexington more campaigns against UBS are scheduled for the next days, rather small campaigns. It appears to be a regional conflict, it’s about protecting the environment, Mountains, Coal, something like that.

Looking at it from this side of the Atlantic Ocean, for instance from the UBS Headquarter at Zürcher Paradeplatz, only one fact seems to be gob smacking: There are UBS Branches in Places like Chattanooga, Johnson City, Asheville or Oak Ridge, who would have guessed? A universal bank , a global player. This corporate group a main financer of American mining, according to those letters and protest signs. And Swiss bankers seem to have become part of politics in Kentucky, West Virginia or Tennessee, somehow. In these mountains mining companies started to use brute mining methods. To get to the coal they simply blow off the mountain top, the cheapest method. Huge Komatsu-Trucks collect the boulder and cover the surrounding valleys with it. The rest of the mountain including the coal is ablated.

“UBS would never finance this kind of method in the Alps” says William Isom, Member of the NGO Mountain Justice in Kentucky. “Never, unthinkable something like that would be approved in Europe.

But the US are a big country, there are many remote places in these mountains, economically drained, with little job opportunities. But right here the major coal sources of the US are to be found. Since the eighties mining companies ablated 5500 square kilometers of hilly landscape in the Appalachian mountains, almost the size of Kanton Bern, and according to calculations by the US Government a 1000 kilometer of river disappeared. Groups trying to protect the environment came up with data stating that the explosive power used on one day equals the power of the Hiroshima bomb. Dozens of different species of animals and plants our threatened by extinction. The ground water around the mines shows too high levels of Arsenic, Lead, Barium and Manganese. The People in the neighborhood have to keep living in a place that quakes on the bottom, is covered by ash clouds and soon reminds of the landscape of the moon. Most people decide to leave their homes.

The business heavily relies on funds and here lies the weakness of mining companies:

They depend on banks that offer huge credit limits, like Citigroup, Morgan Stanley, the Bank of America and UBS. So young protesters in Tennessee, Kentucky or Wets Virginia rather gather in front of Banks than in front of the iron gates of mining companies. “ By putting pressure on the creditors we slow down the mining companies” says Ricki Draper, member of Mountain Justice in Knoxville. And as a matter of fact several banks have already pulled out. Credit Suisse announced in September 2010, to quit financing and counseling those companies which do business in mountain top mining. The spotlight is on UBS now, being one of the few remaining banks with branches overseas. “Foreign Banks have no ties with our community”, “But we have to watch whole communities being turned into solitude” says Ricki Draper in Tennessee. It sounds like the echo of manager wisdom: each business is local, despite globalization.

The corporate management in Zurich took note of these circumstances. For 2 years the notion “Mountain Top Removal” found its way into the annual report in which UBS keeps promising an improved process in regards to examining diligence and the grants. According to an official statement on the 9th November 2010 the Bank intends “to engage to more watchfulness, reviewing to what extend companies build their business on MTR-mining and if they tend to reduce this method of mining over time.” It sounded like a promise”. Just the day before, on the 8th November, UBS granted a 200 million dollar credit to Massey Coal in Virginia, the leading MTR-Company in the Appalachian mountains. In the 151 pages long credit contract the notion MTR appears not even once.

Soon after, in January 2011, UBS Investment Bankers from Stamford and New York flew to Virginia, to handle and advise the Merger between Massey and Alpha Natural Resources, giving birth to a Mining giant owning a quarter of the US MT-mines.

Seven weeks later, beginning of march, UBS together with Deutsche Bank helped the mining corporation James River Coal with an acquisition granting a 375 million dollars credit. The passed year James River increased the production of MT coal to 986 000 tons, 350 000 tons more than 2010, 50 per cent plus. These numbers were researched by Rainforest Action Network; James River doesn’t want to comment on it. The UBS statement seems rather misleading. The SEC and Bloomberg numbers state clearly that in the passed year UBS was business partner with 4 of the nine biggest MT-corporations. Only a few weeks ago UBS renewed a credit for a big player in MT-mining, Patriot Coal in Saint Louis.

“UBS destroys our mountains” protesters say, “UBS go home”, you can hear in front of UBS branches. By the way the banks dilemma is that its employees perceive hostility from private customers due to the banks business deals. They face different and partly odd interest groups, amongst them groups such as the green Christians or a priest who founded a church against consumption. These groups use Facebook and other websites, pointing out, that UBS is the third biggest financier for the environment sacrilege in the Appalachian mountains, UBS also made number one.

Amanda Starbuck, observing the Energy and Finance Business for Rainforest Action Network, says that UBS doesn’t stick out anymore, today it is the Bank of America, Citi, Morgan Stanley and PNC that stick out, when it comes to financing MTR.

After all one can imagine that the citizenship and responsibility Reports of these banks in reality are rather meaningless. Where does responsibility begin in a global investment bank? When making deals with a corporation whose subsidiary company produces cluster bombs, deals with a resources corporation, whose copper mines release yellow acid into the Congolese river?

A Banker said: “ You always need to consider the regulatory circumstances in those matters”. In other words: It is about politics. It is no coincidence that the notion MTR appeared in the banks annual reports in the last 3 years. In Summer 2009 the Obama government started to tackle the problem MTmining. With the existing water protection laws they are trying to limit mining projects, new mountain blistering are examined more strictly. It is an ongoing struggle. The concerned states have no interest in putting a halt on the black of income. 3 Weeks ago the parliament of Tennessee put off a new law, forbidding the MTR technique.

National, regional or local: Which side should a global player take?

To come to a conclusion, the department of responsibility at UBS had several talks with environment organizations. From UBS point of view: No, we don’t destroy mountains. “UBS cooperates with mining companies world wide” says Christian Leitz, head of the department for responsibility.” But we have not financed any MTR project directly. In fact in Northern America you will find no mining company which exclusively does business with MTR. These companies have usually many divisions and locations, often on different continents. On the other side UBS has an investment bank , which acts globally; aiming to be under the top ten in regards to company transactions; the energy and mining business, from a global point of view, is one of the most important business sectors. And coal is a material with a future.

It is hard to believe, when listening to politicians or believing the media, rather talking about renewable energy; the facts show: Coal consumption will increase by a fifth within the next years, this is the estimation of the international Energy Agency. The number of Coal power plants in the USA increased since the year 2000 from 1000 to 1400.

Until 2020 Europe will have 80 more new built coal power plants, 3 times more then in the last decade.

The USA is, thanks to the big resources of coal, something like the Saudi Arabia of Coal. Who doesn’t want to take part? 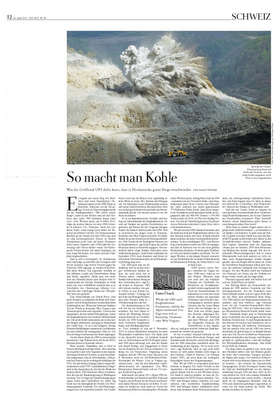 Posted by Beth Wellington at 11:55 PM