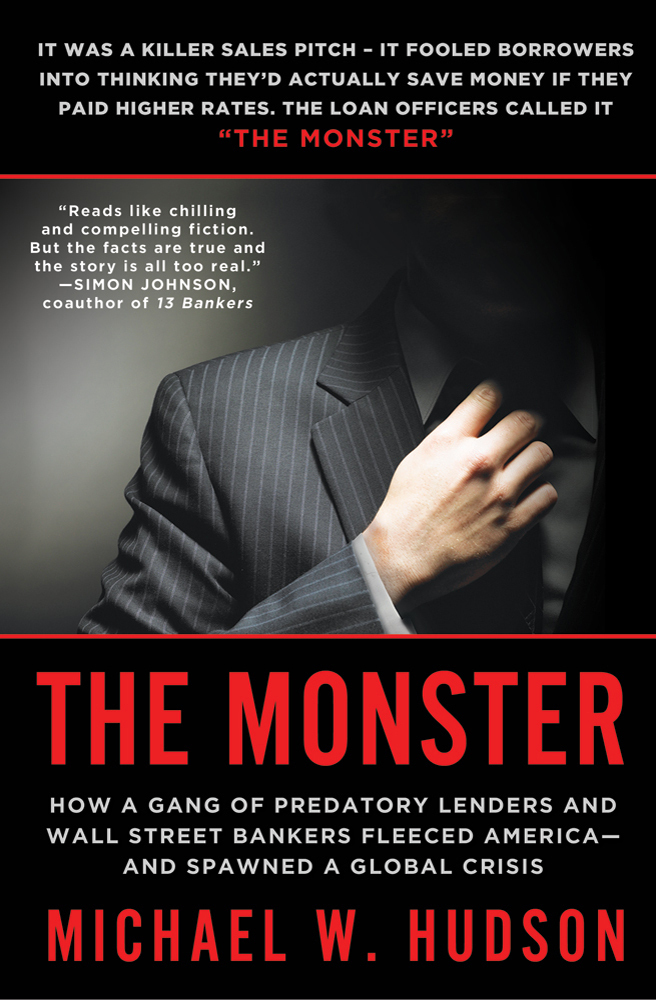 Cover from MacMillan Publishers.  Just heard back from Nona Walker, book editor of the Roanoke Times, that this review, with minor changes, is slated to run January 2, 2011.  Since there is usually non permalink for reviews there, I'm posting a copy here with a few links, along with a bit of an introduction.


November 8, I had the pleasure of listening to Mike Hudson speak at Washington and Lee about the connection between predatory lending, Wall Street and the past two year's economic meltdown.  That's the subject of his new book, THE MONSTER: How a Gang of Predatory Lenders and Wall Street Bankers Fleeced America—and Spawned a Global Crisis, which came out in October from Holt/Times Books.

Here's a 2008 interview by Randall Chittum published by Columbia Journalism Review in which Mike talks about the leadup to the mortgage crisis and how the dots were there in the form of individual stories--which never got connected:

Mike currently covers business and finance for the Center for Public Integrity, an investigative journalism non-profit. Before that, he worked as a reporter for the Wall Street Journal and wrote for Forbes, the New York Times, the Los Angeles Times and Mother Jones, among others.

I met Mike when he was working for the Roanoke Times covering the low-income beat and graciously sent me a note to say our all-volunteer 8-12 page alternative monthly, the New River Free Press, had scooped his daily on the criminalization of panhandling.

Mike started on the trail of predatory lending long before the current melt-down, after he received a 1992 Alicia Patterson fellowship to research businesses that target low-income Americans, He edited the award-winning book Merchants of Misery:  How Corporate America Profits from Poverty (Common Courage Press, 2002 and appeared in the documentary film Maxed Out:  Hard Times, Easy Credit and the Era of Predatory Lending (Trueworks, 2006).

This fall's latest banking scandal revealed foreclosure lawyers backdating mortgage documents and faking affidavits to courts in order to evict families and resell their homes. After more than two years of stories on the sub-prime mortgage crisis, readers may have wearied . Was the resulting financial meltdown an unavoidable market accident--as former Federal Reserve Chairman Allen Greenspan called it, a “once-in-a-century credit tsunami?” If so, what's the purpose in studying it?

In The Monster, Mike Hudson paints the larger picture, connecting the dots all the way back to the 80s, exploring how the “plain vanilla business” of mortgages was corrupted and who is to blame. Rather than a tome on finance, The Monster reads like a true-crime story--perhaps because Hudson's first job out of college was covering the Roanoke Times & World News's police beat. The compelling story he unravels stems from interviews with hundreds of individuals and from thousands of pages of court transcripts. Hudson pieces together a Rube Goldberg world of falsified income, forged signatures, and pressure on families to sign sub-prime loans as quickly as possible.   He shows large investments from Wall Street firms sustained these practices, concentrating on Roland Arnall--who created Ameriquest, one of the first and biggest predatory lending firms--and on the Wall Street firm of Lehman Brothers.

For Hudson, Arnall represents the birth of the sub-prime mortgage industry. An immigrant who originally opened up a savings and loan to bankroll his real-estate projects, Arnall figured out how to make lots of money making high-priced home loans to borrowers in mostly minority neighborhoods. His workers felt his impatience to grow the business. Dennis Rivelli, a former manager, told Hudson, Arnall

never cared how you got the volume and where it came from and what you had to do to get it...He could care less. Just pump it out and move on.

After being pressed by S&L regulators in the early 1990s, Arnall morphed his savings and loan into a lightly-regulated independent mortgage lender, Ameriquest. His company might have been advertising as the ""proud sponsor of the American dream" of home ownership, but it wasn't even generating new mortgages. In 2004, one quarter of 1 percent of Ameriquest loans went for home purchases. 99.75% went for refinancing deals with onerous fees and loan rates which increased the odds of foreclosure.

Take, for instance, the case of Carolyn Pittman, who had borrowed $58,859 in 1993 with her husband to buy a one-story, concrete block house near Jacksonville, Florida. They paid $500 per month on a fixed-rate FHA loan which included home insurance and property taxes.


Even after Charlie died in 1998, Pittman kept up with her house payments. But things were tough for her.... Like many older black women who owned their homes but had modest incomes, Pittman was deluged almost every day, by mail and by phone, with sales pitches offering money to fix up her house or pay off her bills. A few months after her heart attack, a salesman ... caught her on the phone and assured her he could ease her worries. He said Ameriquest would help her out by lowering her interest rate and her monthly payments.


By the time Pittman had been churned through the mill, her house payment came to $1,069 per month. And Arnall's reaction to such stories, "Stuff happens."

For those who gave themselves over to the breakneck pace of life inside Ameriquest, the rewards were dazzling. Twenty-three year old salesmen made $100,000 per year. Twenty-six-year-old branch managers groused $200,000, $200,000, even half a million dollars a year, and boosted their takes higher as they climbed within the companies ranks. Many would become millionaires as they made Roland Arnall a billionaire.


After one aide left the company his consulting contract from Arnall yielded $35 million dollars.


Nothing could have happened on this scale, however, without the infusion of huge amounts of capital by Wall Street firms such as Lehman Brothers. Lawrence McDonald, a vice president at Lehman explained that

The executives who ran the company's sprawling mortgage business...had direct access to CEO Dick Fuld and his inner circle ..."Their words were not so much heard as acclaimed...Whatever they needed--extra budget, permission for more risk, permission to invest colossal hunks of the firm's capital in their market--they got."


Hudson first wrote about predatory lending in “Stealing home” for The Washington Monthly (1992) and “Poverty, Incorporated” for Southern Exposure (1993). What’s remarkable to me is how Hudson has stuck with this story. While other reporters wrote an account here or there before dropping the subject, Hudson pressed on, often as a freelancer, completing “Banking on Misery” for Southern Exposure in 2003 and “Workers Say Lender Ran 'Boiler Rooms' (on Ameriquest with E. Scott Reckard) for the Los Angeles Times in 2005, before writing a series of stories for The Wall Street Journal in 2006-7.

Only after the crackup had already begun... [was] Wall Street's role in the subprime again laid bare...It referred...to documents available for years. There is really no excuse...as federal regulation folded like a cheap suitcase, the business press...lost whatever taste it had for head-on investigations of core practices of powerful institutions...it relies on [Wall Street and corporate subculture]...for its stories. Burning a bridge is hard.


Hudson now writes about business and finance for the Center for Public Integrity, a nonprofit journalism organization founded by Charles Lewis (bio) who explained his reason for founding the Center in 1989 (see IRE Journal, Spring 1990, "Mercenary, Not Public, Service."

America's best and brightest reporters, working for the most respected national news organizations, too often do not investigate the country's most important stories.


Predatory lending's contribution to our current economic upheaval is one such story. Some might argue that the buyers should beware, that corporations and politicians will always be complicit. Such cynics probably see no place for investigative journalism. I'd disagree. Hudson digs deep and provides a compelling, convincing account for those who hope that an informed public can stimulate reform.
Posted by Beth Wellington at 12:01 PM