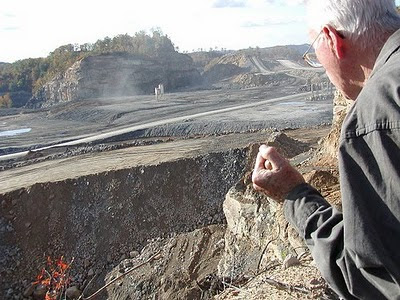 Photo from KFTC, via ilovemountains.org. I've checked with Jamie Goodman to try to get more info on the photographer.

Montgomery Creek Kentucky is one of those mountains that isn't any more. Today I was corresponding with fellow journalist Anne Butterfield who writes about coal issues from Colorado and she was surprised to learn that mountain removal operations in Appalachia often don't own the land they destroy. They lease it. And sometimes they don't even do that--they steal it.

Consider the case of McKinley Sumner, a member of Kentuckians for the Commonwealth (KFTC) who testified in 2007. ICG is International Coal Group, which I have written about before in connection with its deep mine disaster at Sago. Evidently the corporation, having bought out companies in bankruptcy, is also blowing up mountains--without the permission of its owner. How the corporation would defend this, I don't know. Gene Kitts of ICG defends mtr in principle at Ken Ward's blog here. (pdf at the company's site, here.)

ICG had approached my siblings and I about selling or leasing them our land that is about 63 acres. I told them a number of times that we did not want to sell to them because I wanted to live out my days here on the land I grew up on. This company did me dirty on George’s Branch, and I didn’t trust them so every so often I would go up the ridge to make sure they weren’t getting on my property. Back in August, I was out in the yard one day and I heard this awful commotion. It didn’t sound right to me, so I decided to go to the top of the mountain. I put on my boots to keep the copperheads and rattlesnakes away and headed up. When I got back there, I saw this monster bulldozer. At about the time I got to the top, a truck pulled up. I went up to the person in the truck who was apparently the foreman, and asked him if he realized they were on private property. He said, “No, I don’t think so.’ I responded by saying, "Yes, I do think so!" I talked to him for a minute and then I started on down the ridge to see what all they had done. I started down the ridge, and he said, "You can’t go down the ridge."

I said, "I can go anywhere I want to on our own property, so you don’t tell me where I can go and where I can’t go. Furthermore, when I go down the ridge and see what all you’ve done, you don’t be here when I get back." A few evenings after this happened a representative from ICG coal company called me. They said it was a mistake, and that they would make it good. I don’t think it was a mistake. I think the company wanted to see how far they could push me. They couldn’t say that it was a mistake because my property lines were well marked, and there was a big white oak tree that was well-marked by the surveyor where the property lines were. I had talked with them a number of times before and told them that they weren’t to get on my property. After the company realized that I had contacted a lawyer, they took it upon themselves to contact the state. When I talked to Susan Bush [Commissioner of the Department of Natural Resources], she knew about the problem, and ICG said they had gotten off permit by mistake. The state gave them a citation back in August, but they still have not issued ICG a fine. It makes me think that the state does more for the companies then they do for the property owners of Kentucky. This whole situation has caused me a lot of aggravation and stress. I have had to put out a lot of money, about $7,000 in total, from my own pocket to make sure I knew where the property lines were and that the lines were well marked. The pegs and flags were removed on other part of the ridge, which cost money to have the property line remarked. I don’t know who else would do that but the coal company. I am 74-years-old, and I hike up to the ridgeline three times a week to make sure the company is not trying to come on my property again. I just want them to know that I’m still here and I’m watching. I just don’t think that this should be happening in the United States.

This led to the purchase by so-called bottom-feeder Wilbur Ross Jr. and ICG. Ross went on to sell ICG, as in the case of his other acquisitions. As KFTC writes,

Another KFTC member Carolyn Brown was quoted by Kentucky writer Mary Popham, in and July 9, 2007 op-ed in the (Lexington, KY) Herald-Leader about coal-to-liquid technology and its acceleration of mtr.

The wildlife is being destroyed. All the trees, the plants, yellowroot, wildflowers. Our streams are black, ruined. You drive through the areas, you see nothing, all the trees are gone. You see dirt, nothing won't grow on it. Where they plant grass, it won't grow. Some people still like to enjoy the natural look of the mountains. Our children will not get to see them. Because coal companies come in and make some people a few bucks. The land will be gone. It breaks my heart. It insults me. I really don't know how, but we have to save the mountains we have left.

Posted by Beth Wellington at 2:45 PM