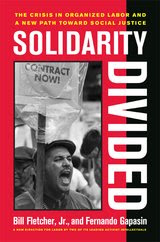 Cover art from Solidarity Divided: The Crisis in Organized Labor and a New Path toward Social Justice by Bill Fletcher, Jr. and Fernando Gapasin (University of California Press, 2008, 978-0-520-25525-8).

Solidarity Divided examines organized labor's current decline and provides suggestions for the way forward, offering history and analysis. The authors consider the influences of globalization, the environment, and fallout from the 2000 and 2004 elections.

Bill Fletcher, Jr. (email) is Director of Field Services and Education for the American Federation of Government Employees, Executive Editor of BlackCommentator.com and co-founder the Center for Labor Renewal, He served as President of TransAfrica Forum and was formerly the Education Director and then Assistant to the President of the AFL-CIO.

Fernando Gapasin is President for the Central Oregon Labor Council and currently teaches at the University of Oregon.

Democracy Now featured Fletcher on September 19 talking about what the Wall Street meltdown means for the American worker.

Here is an outline of the contents of the book:

Preface: Revelations in South Africa
Introduction: Change to Win and the Split in the AFL-CIO

PART I. CHALLENGES FACING THE U.S. LABOR MOVEMENT
1. Dukin' It Out: Building the Labor Movement
2. The New Deal
3. The Cold War on Labor
4. The Civil Rights Movements, the Left, and Labor

PART II. THE REVOLUTION WILL NOT BE TELEVISED
5. Whose Welfare Matters, Anyway?
6. What's Left for Us?
7. Organizing to Organize the Unorganized

PART IV. WHEN SILENCE ISN'T GOLDEN
13. Restlessness in the Ranks
14. Change to Win: A Return to Gompers?
15. Anger, Compromise, and the Paralysis of the Sweeney Coalition
16. Left Behind

Appendix A. A Process for Addressing the Future of U.S. Organized Labor
Appendix B. Using Race, Class, and Gender Analysis to Transform Local Unions: A Case Study
Notes
Bibliography
Acknowledgments
Index
About the Authors
Posted by Beth Wellington at 5:00 PM