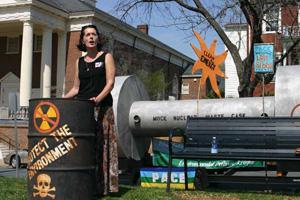 Photo of Lois Gibbs of Love Canal fame who spoke against the new nuke plants near Louisa, Virginia when she was in Charlottesville.


With over 200 miles of shoreline and some 13,000 surface acres of water, Lake Anna is a recreational centerpiece that maintains a rural charm. As Virginia's second largest lake, it has become a premier choice for water lovers. Here, you can enjoy water sports of your choice - power boating, sailing, water skiing, wake boarding, jet skiing and certainly swimming. One of the most common reasons water enthusiasts love Lake Anna is because of its clean water. If you're an angler, you'll find that Lake Anna is a proven year-round fishery. One of the best lakes to fish for lunker largemouth bass on the eastern seaboard, Lake Anna is also known for its hard charging stripers and fine eating crappies. Catfish, bream and walleyes are also on the lake's menu.

Sounds idyllic. Besides the marinas and restaurants, there are homes strung out along the shores of the lovely lake near Louisa, VA. What a great place to build two additional nuke plants. (There are already two.) But this is exactly what Dominion Energy applied for on September 25, 2003 .

I happened to be in Charlotesville in March 25, 2005 for the Virginia Festival of the Book when the Blue Ridge Environmental Defense League (BREDL) brought down Lois Gibbs to explain why the North Anna application was a bad idea. Health hazards, adverse environmental impacts, nuclear waste uncertainties. She sure convinced me.

For details, read BREDL's report, issued in June of 2004. Read the August 2, 2007, BREDL comments filed with the Virginia Department of Environmental Quality, citing concerns about the water temperature of the discharge.

But, today, the Nuclear Regulatory Commission (NRC) ignored all this and authorized an Early Site Permit (ESP) to Dominion Nuclear North Anna, LLC for the site. The NRC staff has 10 business days to issue the permit, valid for up to 20 years. This is the third permit approved. The NRC granted one for the Clinton site in Illinois on March 15, and for the Grand Gulf site in Mississippi on April 5. A fourth ESP is being processed for the Vogtle site in Georgia.

The NRC published a final safety evaluation for the North Anna ESP in August 2006, a final environmental impact statement in December 2006, and then the Atomic Safety and Licensing Board (ASLB) conducted a hearing on June 29, 2007, ruling that the permit could be issued. See: http://www.nrc.gov/reactors/new-licensing/esp/north-anna.html. Those in Louisa County can view the documents at the library, 881 Davis Highway in Mineral, VA.

Supposedly, safety and environmental issues have been resolved and the site is suitable for construction and operation of a nuclear plant. The company (or any other potential applicant interested in the site) still must seek NRC approval to build one or more nuclear plants on the site. But what are the chances of refusal?

Is any site suitable? Especially one this close to the Nation's and the State capitals. How can the Bush administration harp on the need for Homeland Security and at the same time go full speed ahead, building new nuclear plants? Wouldn't wind, solar, geothermal, etc. be a better idea? Think of the opportunity costs of continuing to shovel money at nukes, oil and coal, just because they are entrenched and have so much influence.
Posted by Beth Wellington at 9:12 PM