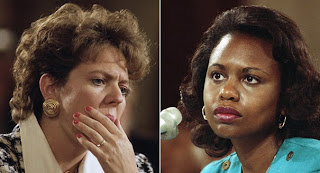 Ginni Thomas crossed our collective radar screen this week, when Charlie Savage reported she viewed herself as holding out an "olive branch" on October 9 when she left a voice mail for Anita Hill demanding an apology, an explanation and perhaps prayer. On the very morning she had called Hill, the New York Times page A1 featured Jackie Calmes reporting "Activism of Thomas’s Wife Could Raise Judicial Issues."

Ginni Thomas married to Justice Clarence Thomas 23 years ago. According to a February 18 interview with Hot Air's Ed Morrissey, Ms. Thomas--a long-time conservative advocate associated with the Chamber of Commerce and the Heritage Foundation--founded Liberty Central in November 2009 to roll back Obama’s left-leaning ways.

We cannot see into the mind of Ginni Thomas as she called Hill, but I found myself asking if Ms. Thomas were motivated by more than a desire to stand by her man?


Poring over LC’s sole form 990 filed for FY2009, I wondered who would give $500,000 and $50,000 since Liberty Central is organized as  a non-profit under IRS Code Section 501(c)4 and can't offer donors tax deductions. I also wondered how much Ms. Thomas will receive as CEO, since she (conveniently?) collected no salary during the period covered by the tax form.

Next I looked at Liberty Central's website and noticed that the organization claims to be "non-partisan," its scorecard for my state graded all the Democrats "F" except one "D" and all Republicans "A."

Any (c) 4 group gets the protection for its donors established under NAACP v. Alabama. And, under current law, (c)4’s do not have to report electioneering-types of advertising more than 60 days before a general election or 30 days before a primary. They do not have to report non-broadcast communication--mail, Internet, telephone---nor candidate-specific issue ads that fall outside the legal definition of political speech.


All eight of Justice Thomas's colleagues upheld the disclosure rules, on the grounds that the public has a real interest in knowing who spends in political races. Thomas was the sole outlier in voting against disclosure.


it's important that Ms. Thomas doesn't lose any of her First Amendment rights just because her husband is a judge…The concern is that Justice Thomas would face a conflict of interest if...ever asked to hear a case involving the groups that have given major contributions to his wife's group. Judges — including Supreme Court justices — are ethically obligated to step aside from any cases in which they have a financial stake, and they must also step aside when their impartiality might reasonably be questioned……The public would not know that there is a conflict if the identity of the donors has not been disclosed.

We do know that Koch Industries rallies the right twice a year to plan on how to sway public policy and that former guests include Justice Clarence Thomas.

Non-disclosure should not be germane to all (c)4's

The non-disclosure precedent of NAACP v. Alabama is only germane to (c)4’s, Campaign Legal Center's Trevor Potter wrote me,

IF the groups can make the arguments made by the NAACP--that their donors would be killed or beaten or their houses burned down if their identities were known.


We do know that during this election cycle, record donations are flowing into the (c)4’s.

For instance, Doyle McManus reports that one new such group, CrossroadsGPS, advised by Karl Rove,


says it's going to spend $65 million this year — much of it to try to defeat [Senate Majority Leader Harry Reid.


by more rigorous disclosure legislation, in hopes of exposing more vividly who is in fact benefiting and, perhaps, by embarrassing the beneficiaries.

In Congress, the House passed the DISCLOSE Act, (H.R. 5175). Republicans in the Senate blocked a vote, most recently on September 24.

It's time for Congress to let us "follow the money."
Posted by Beth Wellington at 4:30 PM