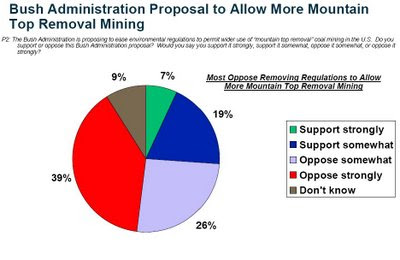 Chart is photoshopped version of page 10 of a national opinion survey prepared September 13 by Opinion Research Corporation for the www.700Mountains.org, the newest project of the Civil Society Institute (CSI).

Here's a draft of the article I just turned in for New River Voice, a new publication edited by Tim Jackson, Assistant Director for Student Media at Radford University.
*
You may have read about recent actions by the Bush Administration to make mountaintop removal (MTR) easier. As Coal River Mountain Watch’s Vernon Haltom told Democracy Now on August 24, "What this rule change amounts to is a declaration of war against the Appalachian People."

What you make not have read about, is how two out of three Americans (65 percent) oppose the Bush Administration's proposal, according to a national opinion survey prepared September 13 by Opinion Research Corporation for the www.700Mountains.org, the newest project of the Civil Society Institute (CSI).
We should call a spade a spade. So-called MTR is mountain range removal. To maximize profits, big companies blast as much as 800 to 1000 feet off the "tops" of our ridges in Virginia, West Virginia, Kentucky and now Tennessee to reach coal seams which lay underneath.
Mountain Justice Summer (MJS) organized four years ago at Virginia Tech after a visit by coalfield activist Larry Gibson, links students throughout the region to coalfield residents. The group explains MTR in its newsletter: "Once the mountains are destroyed, the few jobs obtained from this practice will also dissapear, leaving a wake of devastation and unemployment behind. Instead of fishing, hunting, camping, collecting medicinal and edible plants, instead of clean water from healthy watersheds, and clean air in a peaceful community deeply connected with the surrounding mountains, we will be left with the ravaged, crumpled, barren remains of what was once the backbone of our Appalachian heritage."
At ground level, a thin veneer of hills and forests often remains, hiding the immensity of the destruction. To fully understand the effects of this "stripmining on steroids, " you need to fly over, as I did last October. I joined Tech English faculty members Jeff Mann and Katie Fallon and 13 other writers, on a tour sponsored by the Ohio Valley Environmental Coalition and Southwings to visit Kayford Mountain, south of Charleston, West Virginia.
About all that remains of Kayford, rising out of a vast abyss: fifty acres which once sat halfway up the mountain. Larry Gibson and members of his extended family managed to put their homeplace into a trust rather than sell it to Massey Energy.
If you don’t know about the MTR process, let me explain. Coal companies such as Massey Energy in West Virginia and A&G in Wise County, Virginia take a beautiful mountain covered with deciduous forest. They
For those interested in viewing the destruction in Virginia first hand, Southern Appalachian Stewards (SAMS) offers flyover tours similar to the one I took, here in Wise County, Virginia. Bill McCabe, an organizer for the Sierra Club who works with the group and MJS, hopes to organize a writers’ tour for Virginia. I met McCabe and many SAMS members when I accompanied them to visit legislators to lobby in Washington for the Clean Water Protection Act, which would reverse a Bush Administration Army Corps of Engineers 2002 rule change undermining of the Clean Water Act by classifying the mining rubble dumped in streams as “fill”.
Larry Bush, a former miner and mine safety inspector active with SAMS, told me that there are less destructive ways to mine thin coal seams than MTR, ways that would provide more jobs in the southern mountains and still provide the coal companies with generous profits. The ratio of jobs for MTR versus these other methods is 1 to 200, according to another former mining inspector, Jack Spadaro, who lost his job running the National Mine Safety and Health Academy in Beckley West, Virginia for refusing to whitewash liability for the Martin County sludge spill after the Bush administration took office and ordered him to do so.
Bush administration’s latest assault comes after the deracination of the EPA’s court-ordered Environmental Impact Statement which downplayed the research of government scientists and instead looked at ways to make mining easier. August 24, the administration published its intention to further change the rules, eliminating the requirement to avoid mining within 100 feet of streams. It is as if Big Coal, already violating the law for years and successfully held accountable by citizens in Court, has now been given a free pass.
And our own Congressman, Rick Boucher is himself responsible for promoting destruction of our Mountains. In addition to refusing to co-sponsor the Clean Water Protection Act, he shepherded, over the objection of the House leadership, a stealth clause in the Energy Bill, to promote coal-to-liquid technology and “clean coal” with vague language that “No appropriation authorized pursuant to this section may exclude any category of eligible project described in section 1703" of the Energy Policy Act of 2005.
Many of us in the New River Valley are taking action to stop MTR. Just last month, for instance, we attended the Southeast Climate Convergence and picketed the Blacksburg branch of Bank of America on August 31, in an action organized by MJS and the newly formed chapter of Blue Ridge Earth First! This month we attended a MJS showing of the film “Black Diamonds’ and attended a panel discussion with the filmmaker and others to educate ourself about this distructive practice (see sidebar).
It’s time to write Boucher and demand that he stop promoting the destruction of our mountains. His email address is ninthnet@hr.house.gov.
New River Voice readers can also generate letters regarding the Clean Water Protection Act and against the latest Bush Administration rule and access information on the facts on MTR at the Stop Mountaintop Removal site sponsored by EarthJustice, a public interest law firm, in coalition with various coalfield and environmental groups:

The Southern Energy Network is organizing a series of actions against the new MTR rule. See:
To view the most recent legislative package in support of the Clean Water Protection Act, prepared by Appalachian Voices, see:
To learn about actions by Blue Ridge Earth First, visit the group’s website and sign up for its listserve at :
Also, mark your calendars. Attend the weekly meetings of MJS in Blacksburg at the Squires Student Center. November 7, join us as the campus chapter hosts Dave Cooper's Mountaintop Removal Road Show, including representatives from SAMS (time and place still pending). To get more information, visit the website:

Posted by Beth Wellington at 1:15 PM